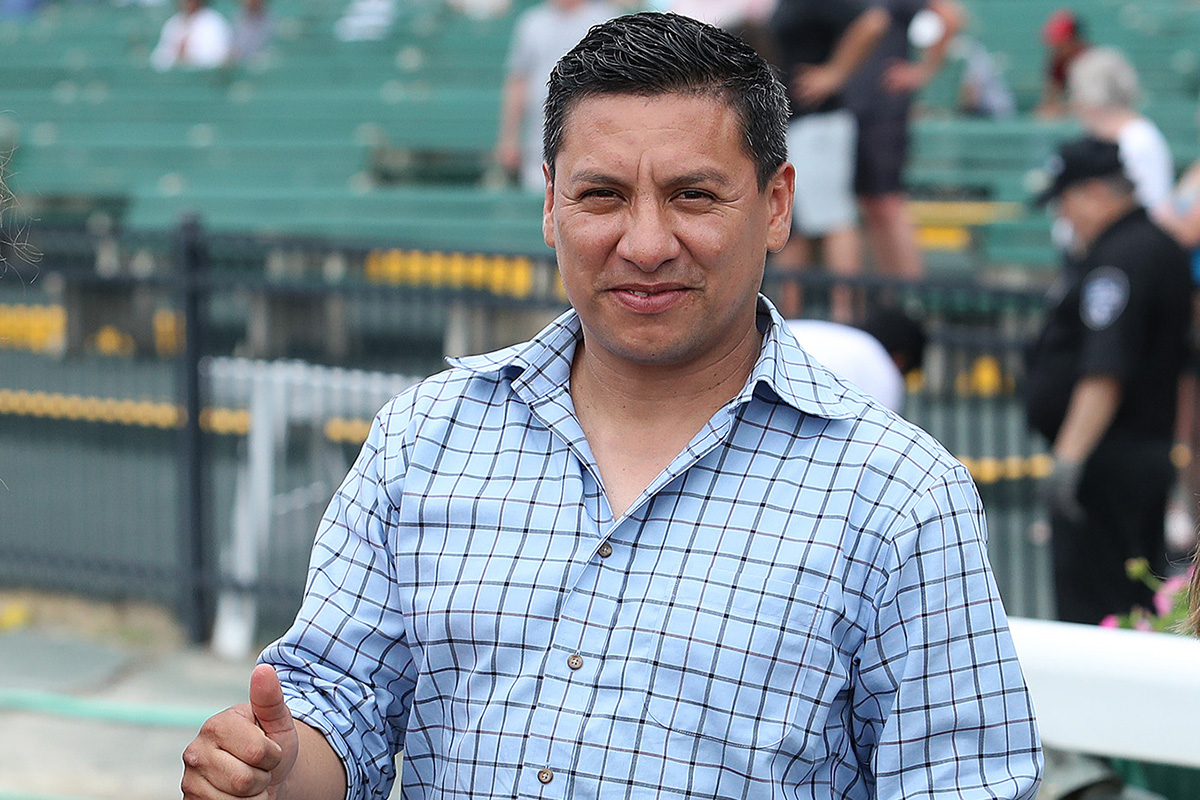 After winning with four of his six starters last weekend, Jose Delgado sits atop a tightly-contested Monmouth Park trainers’ race with 11 wins after 13 days of live racing.

To offset having a stable that is significantly smaller than current co-runners-up Kelly Breen and Wayne Potts (each with nine wins entering the three-day weekend of live racing that starts on Friday) Delgado is winning at a sparkling 35 percent clip. The former jockey also has five second-place finishes and one third-place finish from his 31 starters at the meet.

“It would mean a lot to be the top trainer,” said the 42-year-old Delgado, currently in his fifth year as a trainer. “I was a jockey and it was very tough (to win a title), so now as a trainer I am putting in more work in the morning with the horses and putting more into the game and it has meant a lot to me and my family.”

Delgado attributes his early success this summer to a solid group of conditioned horses, a list headed by The Critical Way, a 7-year-old gelding coming off a victory in the Get Serious Stakes at Monmouth Park on June 19.

“The conditioned horses are the ones who put you into the winner’s circle and I do believe that I have those types of horses now, especially with (The Critical Way),” he said. “He is very professional, and I think we are going to have a good summer with him.”

Delgado intends to enter The Critical Way in the Grade 3 Troy Stakes on Aug. 6 at Saratoga and then in a pair of Grade 3 turf sprints at Parx — the Parx Dash on Aug. 25 and the Turf Monster on Sept. 25. The long-term goal is to get The Critical Way to the Breeders’ Cup Turf Sprint at Delmar on Nov. 6.

Delgado ended the 2020 Monmouth Park meet with 17 wins, which placed him second in the overall standings for trainer behind Kelly Breen, who finished with 32.

Although he is on pace to easily surpass his victory total from the 2020 at Monmouth, navigating the claiming game continues to be a challenge. Delgado said he is trying to be as aggressive as he can at the claiming box to offset having several horses claimed away.

“Claiming is the hardest aspect of being a leading trainer,” he said. “People are claiming horses from me that I know are winning horses and who will win again, so I am losing a winner there that can maybe even win two races, and that’s big (in trying to become leading trainer).”

Delgado, who set a personal best with 54 winners overall in 2020 (he currently has 34 overall), said he started the meet with 30 horses and is now down to 22 because he has had so many claimed away.

“This week I will probably have five horses for the three racing days at Monmouth — Friday, Saturday and Sunday — but some of these other trainers will have 10 horses starting,” said Delgado. “When I had 30 horses, there was no problem. Now I currently train 22 horses. So, it’s going to be tough (to be leading trainer) but I am going to try.

“I am going to continue to give it a shot and, hopefully, we’ll keep the horses healthy and sound and we’ll keep winning. That is the main thing.”