Joevia, King for a Day Put In Final Works for July 20 TVG.Com Haskell Invitational As Field Grows to Eight 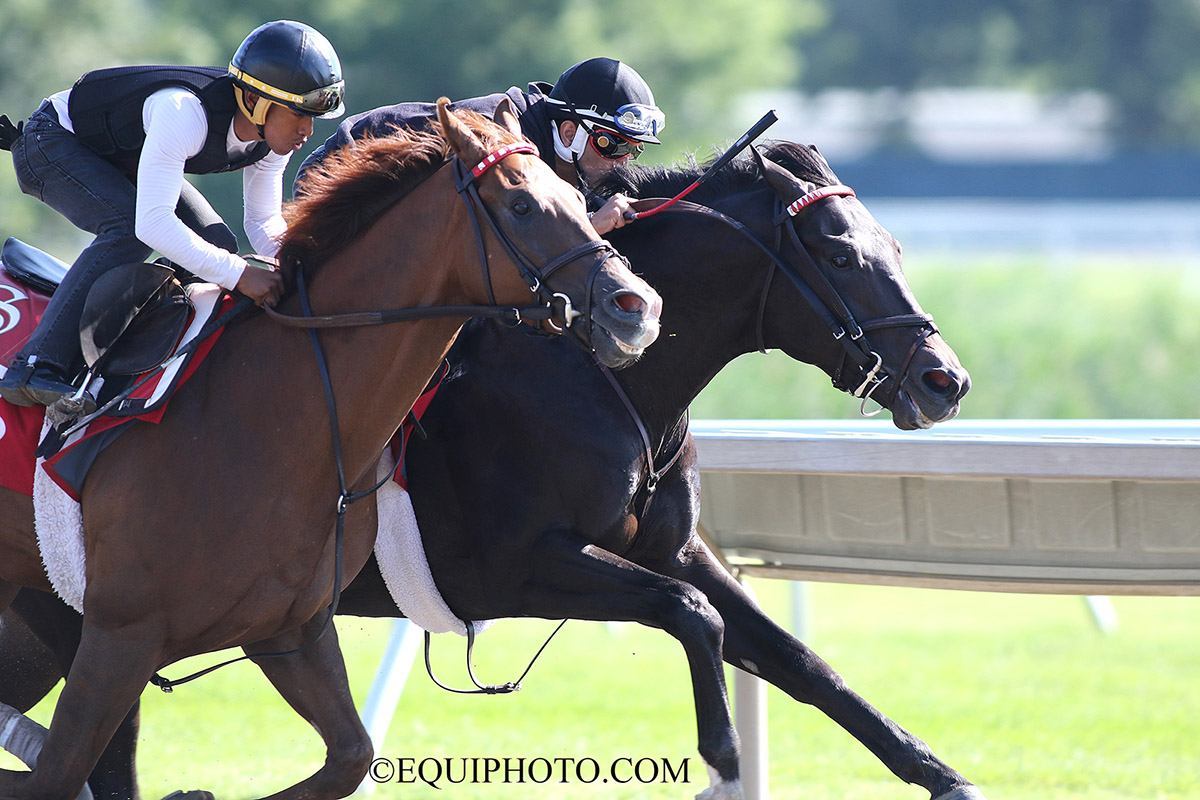 Joevia and King for a Day put in their final serious works on Saturday for the July 20 TVG.Com Haskell Invitational at Monmouth Park, with the field for the $1 million, Grade 1 race expanding to eight with the addition of Bethlehem Road.

Joevia, third in the Belmont Stakes in his most recent start, worked in tandem with Bal Bay Harbor, with both Greg Sacco-trainees hitting the track at Monmouth Park shortly after 9 a.m.

“That was what we were looking for. The other horse is a talented horse who just broke his maiden and is going to run on Haskell Day.”

Hector Diaz, Jr. was in the saddle for Joevia’s work. Jose Lezcano has the mount for the Haskell Invitational.

“We know he’s a nice colt. We wanted to go for it today,” said Sacco. “I didn’t want to pussyfoot into the Haskell, He did it well within himself.”

King for a Day, who posted a stunning upset of 1-20 Maximum Security in the June 16 TVG.Com Pegasus Stakes, “went five-eighths in 1:01” under regular rider John Velazquez over the Oklahoma training track at Saratoga Saturday morning, according to Red Oak Stable racing manager Rick Sacco.

King for a Day is owned by Red Oak Stable and trained by Todd Pletcher.

“It was a maintenance work but he was in the bridle strong and (Velazquez) never moved on him.”

Rick Sacco said Pletcher still has not yet made a decision on when King for a Day will ship from his Saratoga base to Monmouth Park for the race.

The field for the 52nd Haskell Invitational, meanwhile, grew to eight with the late addition of Parx-based Bethlehem Road, who is coming off a fourth-place finish in the Ohio Derby on June 22.

The current probables for the race are Maximum Security, Joevia, King for a Day, Mucho Gusto, Everfast, Spun to Run, Chilly in Charge and Bethlehem Road.

“We were thinking about the West Virginia Derby or the Curlin at Saratoga,” said Curry. “All of the races we were looking at were a mile and an eighth. I’m at Parx. I’m right next door to Monmouth Park. That might be a plus. I don’t have to go that far. I can keep him home until race day. I think that will be a benefit.”

Curry would be the fourth female trainer to have a Haskell starter, joining Nancy Alberts (2nd with Magic Weisner in 2002), Cynthia Reese (4th with Devil’s Honor in 1996) and Linda Rice (6th with Arcadia Falls in 1989).

“I was disappointed in the Ohio Derby because he got bumped hard four times during that race,” said Curry. “The fourth time he got bumped the jockey (Luis A. Rodriguez Castro) said he just seemed to take a deep breath and say `that’s it. I’m done.’

“He has never been bumped the way he was bumped that race. So we’re going to give him a shot in the Haskell. We have nothing to lose.”

Curry said owners Don Ameche III and Griffin Investments “are excited about being invited to the Haskell and the opportunity it presents.”

“I’m a small trainer,” she said. “I don’t get these kinds of opportunities with a horse that fits in this type of race very often. Sometimes you have to take a chance.”

Castro will have the mount aboard Bethlehem Road, Curry said.

Mucho Gusto, who represents trainer Bob Baffert’s hope of extending his record number of Haskell victories to nine, turned in his final work on Friday at Santa Anita, going six furlongs in 1:12.20. A winner of five of seven career starts, Mucho Gusto is expected to ship to Monmouth Park on Wednesday.

Monmouth Park-based Maximum Security, disqualified from first in the Kentucky Derby, is expected to put in his final work for the Haskell on Monday.