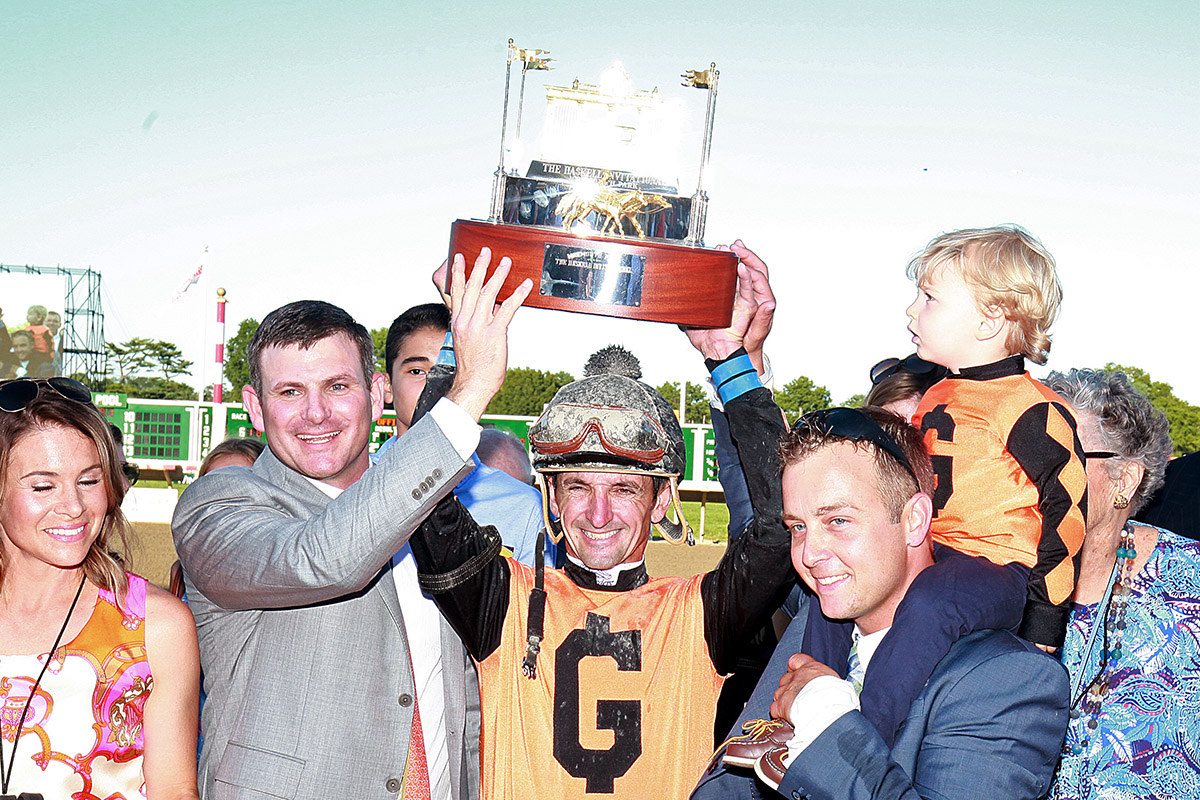 As enthused as trainer Joe Sharp is about the potential of Tracksmith, a developing 3-year-old, he knows there’s a process for getting the most out of Calumet Farm-owned colt.

So while the Grade 3 Virginia Derby at Colonial Downs on Aug. 31 is the next big target for Tracksmith, Saturday’s Frisk Me Now Stakes at Monmouth Park is just as pivotal in the horse’s development in his sophomore campaign.

Coming off a win in his 2019 debut on the grass at Churchill Downs on June 27, Tracksmith heads the field for the $75,000 Frisk Me Now Stakes for 3-year-olds at a mile on turf. It will serve as the feature race on a 14-race card.

“He’s at Saratoga now, so it’s a close ship,” said Sharp. “Ultimately we’re prepping for the Virginia Derby and the timing of the race at Monmouth fell into place. It’s five weeks (from the Virginia Derby). They have a nice turf course at Monmouth, and obviously we’ve had a lot of luck shipping in there.

“He’s doing great and it seemed like a good next move for him. We wanted a good spot for him in his second race off the layoff and this made sense. We’re trying to take some baby steps with him and get him a stakes win.”

A son of Street Sense-Hot Water by Medaglia d’Oro, Tracksmith has two wins and a second in his five career starts. He made his debut at 2 with a victory at 5½ furlongs on the turf at Ellis Park, then was beaten a head in his second start in the Kentucky Downs Juvenile at a mile on the turf.

He was sixth in the slop in the Grade 2 Kentucky Jockey Club, the only time he has not been on the grass, but Sharp said “he ran a respectable race considering he had a pretty tough trip.”

Tracksmith returned to the races with that June 27 victory at Churchill Downs, rallying to win by a head at a mile and a sixteenth on the grass, following a seven-month layoff.

“He was on the Breeders’ Cup Juvenile trail (last year). He just fell a little short in earnings,” said the 34-year-old Sharp. “We gave him the winter off and he came back and ran a huge race off the layoff.

“He has filled out. Mentally and physically he has blossomed. He always had a lot of size but had some filling out to do. He has filled out in all the right places with the time off.”

Adam Beschizza, who has ridden Tracksmith in all five career starts, will again have the mount, and Sharp will make the trek from Saratoga to saddle the horse.

Sharp, who notched the first Grade 1 victory of his training career when he captured the Haskell Invitational in 2017 with Girvin, has only had one other starter at Monmouth this summer. That was with a horse named Morissette, who won a $40,000 claimer on July 5.