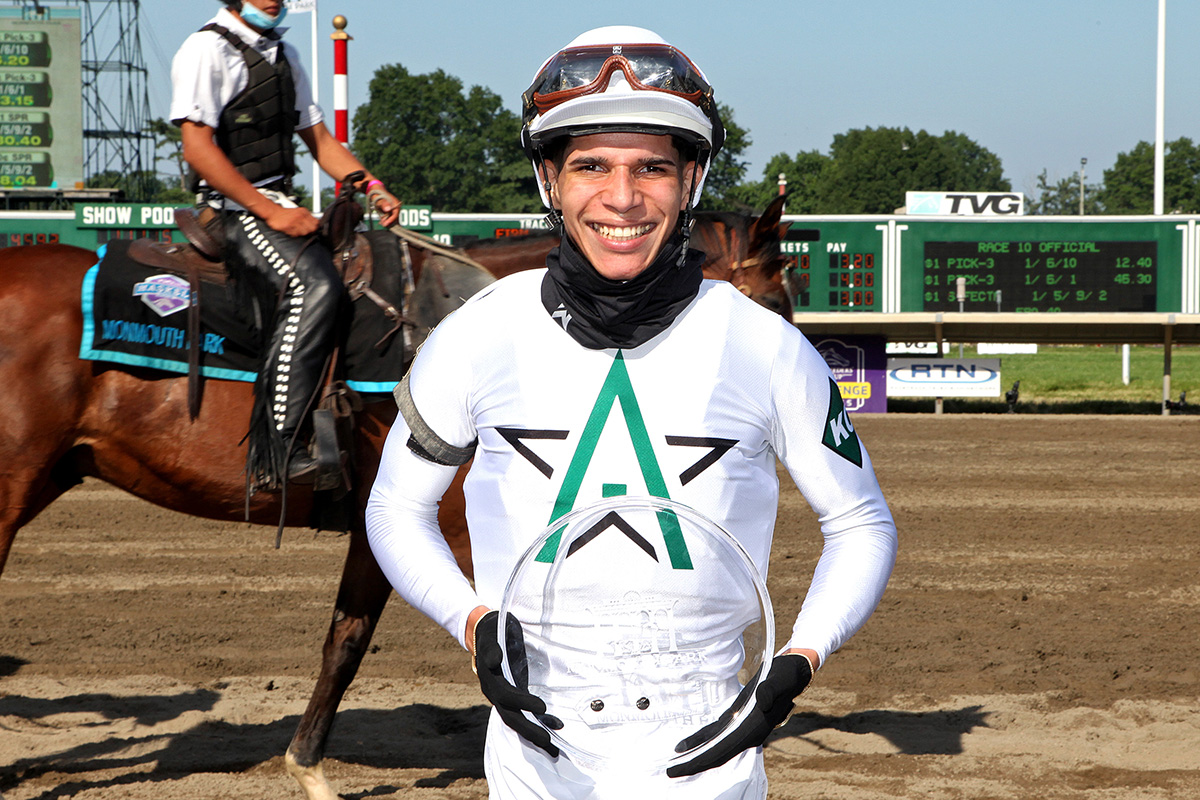 It took a little longer than jockey Jorge A. Vargas Jr. wanted it to or hoped it would, but the 25-year-old finally made the impact at Monmouth Park he expected when he moved his tack from the Maryland circuit this summer.

His timing couldn’t have been better.

After an 0-for-17 start to the meet Vargas broke through with a victory aboard the Stanley Hough-trained Global Campaign in the Grade 3 Monmouth Cup on TVG.com Haskell Day last Saturday. On the same card he was second with 40-1 Our Super Freak in the Grade 3 Molly Pitcher after just missing the first Grade 1 score of his career when Paret could not hold off the late-running Aquaphobia in the United Nations, finishing second by a length.

“It was a little frustrating for me early in the meet,” said Vargas, who has two mounts on Monmouth Park’s six-race twilight card when live racing resumes on Friday at 5 p.m. “When you’re not winning the way you think you should you are always asking `what am I doing wrong?’ You start to feel pressure because you’re riding good horses you think you should win with and you’re just short.

“I had a second early in the meet (aboard Gravitas) and the horse that beat me was 73-1. I’m like `I can’t catch a break.’ Finally, it seems to be turning around.”

Despite being winless early, Vargas kept coming close – adding to the frustration for the native of Caguas, Puerto Rico.

Overall from his 23 mounts at the Monmouth Park meet he has two wins, seven seconds and four thirds.

“Whenever you win it’s good. When you get that first one of the meet in a graded stakes it’s even better,” he said. “Once you get that monkey off your back you feel free and confident again and you can just be yourself without the pressure.

“I got some good feedback from last Saturday. It gives me confidence. I feel like I’m very close (to a breakout streak).”

Since starting his riding career in 2013 Vargas has found solid success. In 2018 he was Maryland’s leading jockey with 110 wins, capturing the Laurel winter-spring riding title that year.

His decision to ride at Monmouth Park full-time this summer was paired with an opportunity that agent Jimmy Riccio set up for him to ride Aqueduct in the winter first.

“COVID-19 kind of messed up those plans,” said Vargas, who attended Puerto Rico’s famed Escuela Vocacional Hipica school for jockeys and counts Manny Franco, Victor Carrasco and Jevian Toledo among his classmates. “But I’m happy to be doing the second half of our plan now.

“I just wanted to try something different. I like to challenge myself. A good opportunity came up with Jimmy Riccio and it was time for a change.”

“I’ve been pretty successful to this point,” he said. It’s pretty amazing when I think about it. But I know I can do even more. Hopefully, I have a little momentum now.”