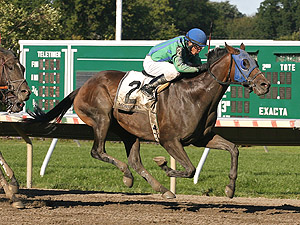 Jersey Joe B, a horse named for 13-time Monmouth Park riding champion Joe Bravo, continued to do his namesake proud by capturing Thursday’s $50,000 feature for Jersey-breds in front-running style by a half-length.

Claimed by USA Thoroughbreds and trainer Kelly Breen three starts ago for $12,500, Jersey Joe B now has a victory and a second for his new connections. Bred by Red Oak Stable, the 4-year-old gelding improved his lifetime record to 3-3-1 from 11 starts.

Able to make the lead with the speedy What the Chub on his flanks for the opening half mile, Jersey Joe B was able to hold off the late bid of Papadopalous for the victory. It was another 1¼ lengths back in third to Unruly Heir.

“He checked all the boxes I was looking for when I clam a horse,” said Breen. “I liked the idea of having another Jersey-bred too. It’s a nice program and it’s always good to have a Jersey-bred in your barn at Monmouth Park.

“Knock on wood we’ve made money with him.”

Jersey Joe B covered the 5½ furlongs in 1:04.55. The race was originally scheduled for the turf but was run over a fast main track.

Winning jockey Albin Jimenez said a bridle change seemed to help after Jersey Joe B failed to finish in his last start, checking in second by three lengths after leading throughout.

“I think the bridle change made a difference,” Jimenez said. “He seemed to have a little more left when he needed it this time.”