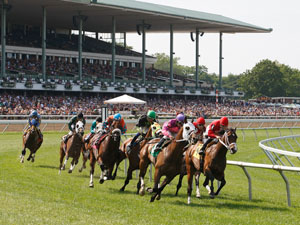 Sifting Sands, from the powerhouse Chad Brown stable, is among eight 3-year-olds (plus one main track only entrant) set to go in the $100,000 Jersey Derby that will serve as the feature race for opening day of Monmouth Park’s 76th Thoroughbred season on Friday.

The Jersey Derby, scheduled for a mile on the grass, will be contested for the 78th time. It’s the oldest Derby in the United States, having first been run in 1864.

Trainers Kelly Breen (It’s A Gamble), Gregg Sacco (It Can Be Done) and Jerry Hollendorfer (Riptide Rock) will look to get off to fast starts for the 53-day meet in the Jersey Derby as well.

Owned by Peter Brant, Sifting Sands will be making just his fourth career start in the Jersey Derby. The Irish-bred son of Dubawi made his last start in the Woodhaven Stakes at Aqueduct on April 21.

The $100,000 Mr. Prospector Stakes at six furlongs headlines the Saturday card, with the $75,000 Politely Stakes serving as the Sunday feature. The Memorial Day card on Monday will be top by the $75,000 Spruce Fir for Jersey-breds.