Irish War Cry Gears Up As A Countdown To Haskell Is On; $1 Million, Grade 1 Event Set For Sunday, July 30 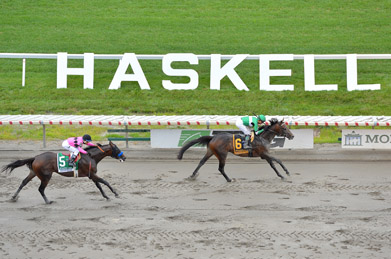 IRISH WAR CRY GEARS UP AS COUNTDOWN TO HASKELL IS ON;

The calendar reads just four weeks until the biggest event at the Jersey Shore – the $1 million betfair.com Haskell Invitational, set to celebrate its 50th renewal on Sunday, July 30.  And as the days tick on so to do the plans for the equine athletes who are preparing for their shot in the Grade 1 mile and an eighth test.

This year’s golden anniversary could prove a storybook tale for the race’s namesake, Amory L. Haskell.  His daughter Isabelle de Tomaso has one of the likely favorites for the race in Irish War Cry, a New Jersey-bred son of Curlin who was born just a few miles from Monmouth Park in Colts Neck.

“We’re really happy with how he has been doing,” said trainer H. Graham Motion.  “He has put on some weight and we’ll start breezing him to get ready.”

That first breeze came this morning at the Fair Hill Training Center in Maryland where Irish War Cry went four furlongs in :49 1/5.

Irish War Cry captured the Wood Memorial earlier this year before his try in the Kentucky Derby.  Most recently he was runner-up in the Belmont Stakes, his last start leading into the Haskell.

“This has always been what Isabelle and Hope (Haskell Jones, Isabelle’s sister) have wanted to do with him, so we’re really excited.”

The perennial presenters of the Haskell trophy, Isabelle de Tomaso and Hope Haskell Jones have been Monmouth Park mainstays since their father resurrected horse racing in New Jersey in the mid-1940s.

To see themselves on the other side of the trophy this year, Irish War Cry will have to best yet another quality Haskell field.  Among those considering a Haskell start for their charges are:

Timeline, Practical Joke – From the Chad Brown barn, Timeline is a perfect four-for-four and a winner at Monmouth after capturing the Grade 3 Pegasus last out, while Grade 1 winning Practical Joke won last year’s Champagne Stakes and just missed in this year’s Blue Grass.

McCracken – most recent winner of the Matt Winn Stakes, this Ian Wilkes trainee is a multiple graded stakes winner.

Talk Logistics – stabled at Monmouth Park for conditioner Eddie Plesa Jr., this colt by High Cotton was runner-up in the Grade 3 Pegasus Stakes last out.

The betfair.com Haskell Invitational is a Breeders’ Cup Win & You’re In event with the victor earning an automatic berth to the $6 million Breeders’ Cup Classic at Del Mar on Nov. 4.