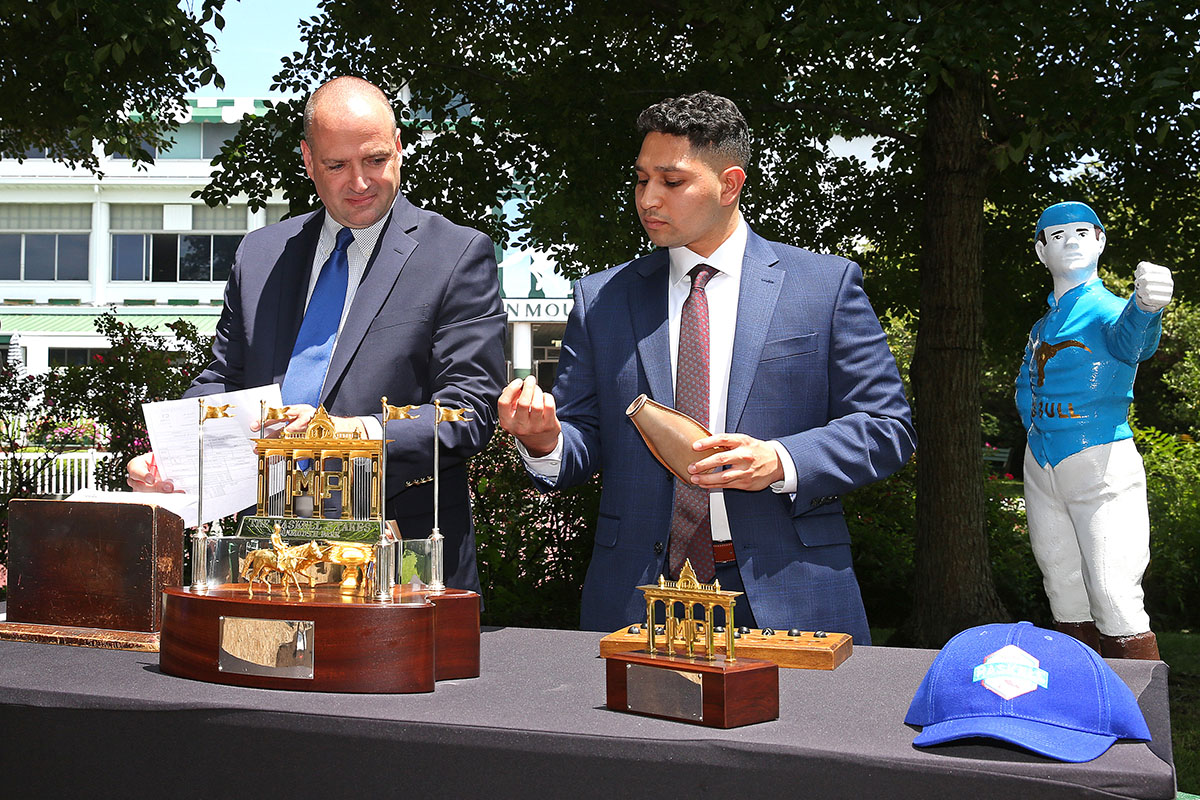 For the first time in the storied history of the $1 million TVG.com Haskell Stakes, the runners-up in all three jewels in the Triple Crown series will line up in the starting gate when the one of North America’s most prestigious Grade 1 races is renewed for the 54th time at Monmouth Park on Saturday.

On the strength of his valiant second-place finish in the Belmont Stakes in the final leg of the Triple Crown last time out, the Doug O’Neill-trained Hot Rod Charlie was installed as the 6-5 morning line favorite (from post position 4) in the field of seven talented 3-year-olds following Wednesday’s draw.

Despite their considerable accomplishments so far this season, none of the colts has earned a Grade 1 victory. The mile and an eighth Haskell, where champions validate their greatness, presents the opportunity to reach that top level, and it also offers the chance for an all-expenses-paid spot to the $6 million Breeders’ Cup Classic as part of the “Win and You’re In” Breeders’ Cup Challenge Series.

The Haskell is the highlight of Monmouth Park’s 48-stakes race schedule, and it marks the beginning of the all-important second half of the season to determine the divisional champion and potentially the eventual Horse of the Year.

Authentic launched his 2020 Horse of the Year campaign last year by winning the Haskell Stakes before going on to win the Kentucky Derby (re-scheduled last year to Sept. 5 due to COVID-19) and the Breeders’ Cup Classic.

“To win the Haskell would be huge. Just huge,” said reigning Eclipse Award-winning trainer Brad Cox, who will send out 2-1 morning line second choice Mandaloun, the runner-up in the Kentucky Derby.

Mandaloun, a Juddmonte Farms homebred, won TVG.com Pegasus Stakes at Monmouth Park in his last start June 13 while prepping for the Haskell.

A Kentucky-bred son of Into Mischief, Mandaloun will depart from post 3 under Florent Geroux, who has ridden the Grade 2 winner in each of his previous seven starts.

“He’s a good horse and he’s been training extremely well,” said Cox. “This (level) is where we belong. I love this horse.”

Breaking just to his outside in post 4 will be Hot Rod Charlie and Flavien Prat, who was aboard for the Belmont and for the Kentucky Derby, where the horse and rider were third, just one length behind Mandaloun.

“I think the draw sets it up perfectly for us,” said Roadrunner Racing’s Greg Helm, the owner of the colt along with Boat Racing, Gainesway Stable, and William Strauss. “Charlie is a pretty versatile runner. Obviously in his last couple of races he went out strong. We’ll see what Flavien feels like coming out of the gate, but I imagine it will be a similar race as the last couple.”

Spendthrift Farm’s homebred Following Sea, an especially promising colt recently transferred to the stable of newly-elected Hall of Famer Todd Pletcher, drew the rail and Joel Rosario gets the return call. The son of champion sprinter Run Happy has won his last two starts by a combined 12¼ lengths but is stretching out from 6½ furlongs for the first time as well as attempting a two-turn race and stakes company for the first time.

Also expected to draw considerable interest is the Winchell Thoroughbreds homebred Midnight Bourbon, the Preakness Stakes runner-up. Trained by Hall of Famer Steve Asmussen, the colt has yet to win a graded stakes but has been impressive while competing against the top of the three-year-old crop all season.

Midnight Bourbon, a half-brother to 2017 Haskell winner Girvin, will have seven-time Monmouth Park leading rider Paco Lopez aboard and depart from post 6.

“I expect Midnight Bourbon to break well, and I think a sharp break for him is essential,” said Asmussen, who won the 2009 Haskell with Rachel Alexandra, only the second filly to win this race. “There’s speed in the race and I think that will make it very interesting to the first turn.”

The rest of the field is all locally based and includes Antigravity (post 2, David Cohen riding); Pickin Time (post 5, Nik Juarez), and Basso (post 7, Isaac Castillo).

Post time for the Haskell, which will be televised by NBC Sports, is approximately 5:45 PM and will be run as the 12th of 14 races on the card. First post on Haskell day is at noon.