Hidden Mystery, Mighty Patient Look to Stay Perfect In Crank It Up Stakes 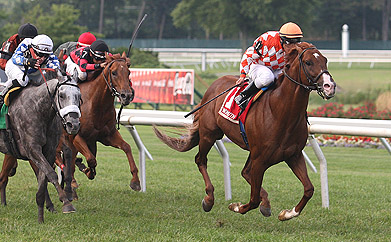 HIDDEN MYSTERY, MIGHTY PATIENT LOOK TO STAY PERFECT IN CRANK IT UP

Hidden Mystery and Mighty Patient, both from the Jason Servis’ barn, look to make it two-for-two in their careers in Saturday’s $60,000 Crank It Up Stakes, going five furlongs on the Monmouth turf.

Owned by Gary and Mary West, Hidden Mystery graduated at first asking on April 27 in a five furlong maiden special weight event on the grass at Gulfstream Park when she sat off the quick early pace and got up in time to win by a nose.

The 3-year-old filly by Into Mischief out of Worstcasescenario has worked once since her debut. She went four furlongs on a fast Monmouth main track in :51 3/5 on June 3.

There’s no surprise that Hidden Mystery ran well on the turf in her debut as it runs in her pedigree. The dam’s sire Forbidden Apple is a multiple graded stakes winner on the grass including the Grade 1 Manhattan Handicap in 2001.

Nik Juarez was aboard in her inaugural start and will get the call once again on Saturday.

Servis’ other entry in the field of 11 is Mighty Patient, owned by Dennis A. Drazin, who broke best in her debut, but was last down most of the backstretch before storming home to victory by ¾ of a length against maiden claiming company.

The daughter of Hansen out of the Saint Anddan mare Sunnyridge Bride has worked once since her score on April 5, going four furlongs at Monmouth on May 19 in :53.

“Both of them have been training great,” said Servis. “They both were able to sit back and rate in their first races and finished well and had some quick times.”

To get to the winners’ circle in the Crank It Up Stakes, Hidden Mystery and Mighty Patient will have to get by three stakes winners including Kathleen O’Connell trained Who’s the Lady, who started off her career with four consecutive victories including a win in the Any Limit Stakes on the main track at Gulfstream Park.

NAVARRO SENDS TWO TO THE GATE FOR SUNDAY’S DECATHLON

Monmouth Park’s leading trainer Jorge Navarro will have two chances to grab the $60,000, six-furlong Decathlon Stakes Sunday when he sends Delta Bluesman and El Deal to the gate to face four other rivals.

Delta Bluesman comes into the event off a third place finish in the Wolf Hill Stakes at Monmouth behind Rainbow Heir, who has taken the race in consecutive years. Eddie Castro got the call that day in the Wolf Hill and will pilot again on Sunday.

“He has always trained well,” said Navarro, who conditions the horse for Monster Racing Stables. “We worked him in company the other day and he finished really well.”

The 7-year-old gelding by Wagon Limit out of the Darn That Alarm mare Smoke Alarm went over a fast Monmouth main track in :47 in his most recent work on June 3, second fastest of the 45 horses that went that distance on the day.

Delta Bluesman became a graded stakes winner last year when he took the Grade 2 Smile Sprint at Gulfstream Park by 3 ¾ lengths. He has hit the board in five of his six career starts at Monmouth, with two wins coming against optional claiming company.

Navarro’s other entry, El Deal, is coming off a big performance in a $35,000 Handicap going four and a half furlongs at Charles Town, going gate-to-wire by 7 ¾ lengths.

“He ran a monster race last time out,” said Navarro. “He’s another one who is training really well especially after his last work.”

Owned by Albert Crawford and Michelle Crawford, El Deal worked a bullet on June 3 when he went four furlongs in :45 4/5 at Monmouth.

The 5-year-old horse by Munnings from the Out of Place mare Spirit of Wailea is looking to grab his second career stakes victory Sunday. His first came in the Gold Fever Stakes in 2015 at Belmont Park when he took the field gate-to-wire in the six furlong event.

Jose Ferrer will be aboard El Deal for the first time Sunday.

The other graded stakes winner that will take a spot in the starting gate in the Decathlon is Always Sunshine. Trained by Edward Allard, he won the Grade 3 Maryland Sprint last year at Pimlico and made his 2017 debut a winning one, easily taking home a $50,000 allowance optional claiming event at Monmouth by 4 ¼ lengths on May 29.

Get ready to cheer on the Scarlet Knights this Saturday at Monmouth Park as the racetrack plays host to Rutgers Day.  All guests wearing Rutgers gear will receive free Grandstand admission, and everyone will have a chance for photos with the Rutgers’ mascot while listening to Rutgers marching band from 11:30 a.m.-1 p.m.

A tent will be erected at the Grandstand entrance to discuss the upcoming football season for the Big 10 Scarlet Knights.

The third jewel in the Triple Crown, the Belmont Stakes runs this Saturday and Monmouth Park is the place to be to catch all the simulcast action from Big Sandy.

Belmont’s entire card, which will be beamed-in to Monmouth, has six Grade 1 races, a pair of Grade 2’s and a Grade 3 event.

The Belmont Stakes has an estimated post of 6:37 p.m.

The 47th annual Irish Festival will return to Monmouth Park this Sunday, June 11. Enjoy a beautiful day of live racing highlighted by Irish step dancing, crafters, food, and a pipe and drum competition. Three different stages throughout the park will host music from the Emerald Isle all day long.

Patrons will also get a chance to enjoy the fan-favorite Human Horse Race, where runners will break from the gate in a sprint on Monmouth’s main track for charity, each in his or her own saddle cloth.

Monmouth Park’s Family Fun Day will continue as well with face painting, pony rides, and a bounce house in the picnic area.

The day kicks off early with a special Irish Mass at 11 a.m. on the Grandstand’s paddock side, first floor.Gates will open on Sunday at 10 a.m., with first post slated at 12:50 p.m.