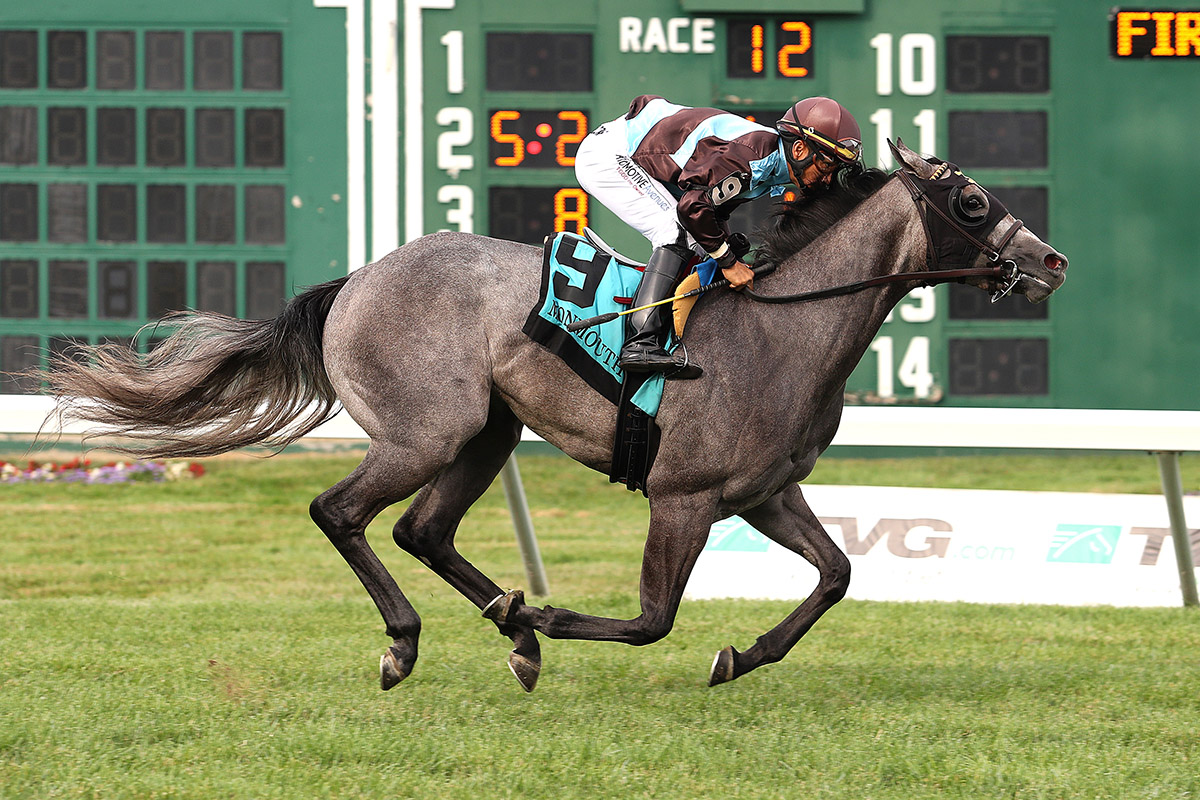 Her World lived up to the hype – and then some.

Touted by trainer Wesley Ward as perhaps the best 2-year-old filly he has ever had at this stage of her career, Her World took on the daunting double task of her first career start coming against colts and in stakes company. She handled both with ease.

In a virtual gate to wire victory, Her World romped to a dazzling six-length victory in the 80th edition of Tyro Stakes on Saturday at Monmouth Park. Ridden by Paco Lopez, the Irish-bred daughter of Caravaggio breezed the five furlongs over a firm turf course in :56.62, easily dispatching her seven male rivals in the $100,000 feature race.

“We’re excited. She did exactly what we thought she would,” said Ward. “We don’t have to change much after watching that race moving forward. We’re going to bring her next to Keeneland, and then we plan on bringing her to the Breeders’ Cup.

“With what she showed today winning in a stakes race against colts who had experience, it’s encouraging. We’re going to skip right along and continue from this. I look forward to her next couple of starts but I also look forward to her being a 3-year-old, and I think (co-owner) Dick Brodie and the rest of the owners have a special one with her.”

The race was marred by a spill that saw third-place finisher Roman Poet drift out at the quarter pole, causing Vodka N Water and jockey Gerardo Corrales to clip heels and go down.

Corrales was taken by ambulance to Monmouth Medical Center for X-rays on his right shoulder, said Dr. Angelo Chinnici, the track’s medical director.

“He was alert and oriented,” Dr. Chinnici said. “He was unconscious for a brief period of time but now he is fine.”

“The horse is up and running around and looks okay except for the cuts,” said Dennison.

Roman Poet, who finished third, was disqualified and placed last for causing the interference.

Her World, meanwhile, made her challenge look almost too easy, returning $3.80 to win as the heavy favorite in the field. Trust Our Journey was second, with Baytown Warrior elevated from fourth to third following the DQ of Roman Poet.

“She is obviously a very nice filly,” said Lopez. “Wesley told me she’s the best filly he has now and maybe for many, many years at this stage of her career. She broke on top and was looking around a little, maybe trying to figure things out (in her first career start). She was very professional.

“I used her to get to the top right away because Wesley Ward told me she had that kind of speed. Sometimes you want to get out there second or third and relax but she wanted to go. I looked behind after a while for the other horses but no one was running at us. She was flying in the stretch.

“You have to be special to do something like this in your first start, a stakes race and a filly against boys. But Wesley was very confident. He told me he loves this filly and wants to take her to the Breeders’ Cup. Now that I have ridden her I know she can do it.”

Her World is owned by Andrew Farm, Susan Molton, For the People Racing Stable and Windmill Manor Farm.

“Personally I was nervous going into the race, but I will tell you what, Wesley Ward had a lot of confidence in the horse and that’s why she ended up in this race against the boys,” said co-ower Dick Brodie of Andrew Farm. “It’s not up to me, but there have been conversations about running her the first weekend at Keeneland. My ownership partnership is with Charlie O’Connor and John Morgan.

“After today, I would definitely tell you this is one of, if not my favorite horse, we own right now. I am thrilled with what I saw.”