Hence Will Look To Add To Asmussen’s Haskell Success 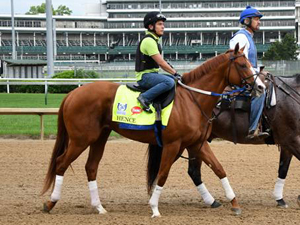 Hence will go for back-to-back graded stakes wins and look to give trainer Steve Asmussen his second victory in the Grade 1, $1 million betfair.com Haskell Invitational on July 30, the 50th renewal of Monmouth Park’s marquee event.

The 3-year-old colt by Street Boss sat last along the backstretch before storming home on the outside to score a length and a half victory in his latest outing, the Grade 3 Iowa Derby at Prairie Meadows on July 7.

Hence broke his maiden in his fourth career start earlier in the year over a sloppy track at Oaklawn Park before grabbing his first win in a graded stakes in the Grade 3 Sunland Derby at Sunland Park on the road to the Kentucky Derby.

He ran in two of the three Triple Crown races this spring, finishing 11th in the Derby and 9th in the Preakness.

Owned by Calumet Farm, the son of the A.P. Indy mare Floating Island has worked once in preparation for the Haskell. That breeze came at Churchill Downs on July 17 when he went four furlongs in :51 2/5 over a fast main track.

“He came out of the race in great shape,” said Asmussen, who won the Haskell in 2009 with Rachael Alexandra. “He’s always been in good physical shape. We’ll get one more light half mile in him before shipping up to Monmouth, most likely Thursday.”

Paco Lopez, Monmouth Park’s leading rider for the last four seasons, will be aboard Hence for the first time next Sunday.

For Hence to be crowned Haskell champion, he will have to get by a competitive field that will line up with him in the gate on July 30. New Jersey-bred Irish War Cry is coming off a second place finish in the Belmont Stakes and won the Grade 2 Wood Memorial in April and third place finisher in the Kentucky Derby, Battle of Midway, won the Grade 3 Affirmed Stakes last time out at Santa Anita

Other horses making the mile and an eighth Haskell their next start include Louisiana Derby winner Girvin; Matt Winn winner McCraken; and, Chad Brown’s duo of undefeated Timeline and multiple grade 1 winner Practical Joke, both entering off Grade 3 victories.