Heavy Favorite Hawkish Captures $100,000 Cliff Hanger Stakes By A Head Before An Opening Day Crowd Of 21,462 At Monmouth Park 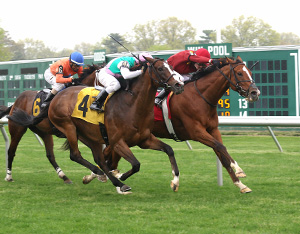 Odds-on favorite Hawkish rallied from mid-pack to split horses in deep stretch and then held off the late-running Projected to capture the $100,000 Cliff Hanger Stakes on Saturday as a crowd of 21,462 welcomed back thoroughbred racing to Monmouth Park.

Trained by James J. “Jimmy” Toner and ridden by Trevor McCarthy, Hawkish needed to dive between three horses late in the one-mile turf feature before claiming his fourth victory in seven career starts to highlight the first of 61 live cards at Monmouth Park.

The 4-year-old gelding, coming off a sharp second-place finish in the Grade 3 Appleton Stakes at Gulfstream Park in his 2019 debut on March 29, held off the Chad Brown-trained Projected by a head. It was another 1¼ lengths back to Mo Maverick in third.

Time for the eight furlongs over a turf course listed as firm was 1:35.24.

“We got a little lucky late in the race the way things opened up for us,” McCarthy said. “When he broke I just wanted to settle him and save a little ground with him. When I finally tipped him out in the three-path it seemed like I had a lot of options with him.

“I knew I was on the best horse I didn’t want to panic with him. When that hole opened in the middle of the stretch I was thinking `this is perfect.’ ”

Owned by Robert LaPenta, AJ Suited Racing and Madaket Stable, Hawkish appears to have regained the form that saw him win three of his first four career starts last year as a 3-year-old, including a track record performance at Aqueduct and a victory in the Grade 2 Penn Mile. All seven of his career starts have been on the turf.

“I thought he ran a great race because he had trouble, tipped out, split horses and showed his quality,” said Toner. “Just a tremendous move for him at this stage of his career. I was worried about Projected because any time a Chad Brown horse gets his nose in front of you, especially late in a race, it’s seldom you will run him down. So I’m very excited about his effort and the way he ran. He’s back on track.”

Hawkish paid $3.40 to win as the heavy favorite in the field of eight.