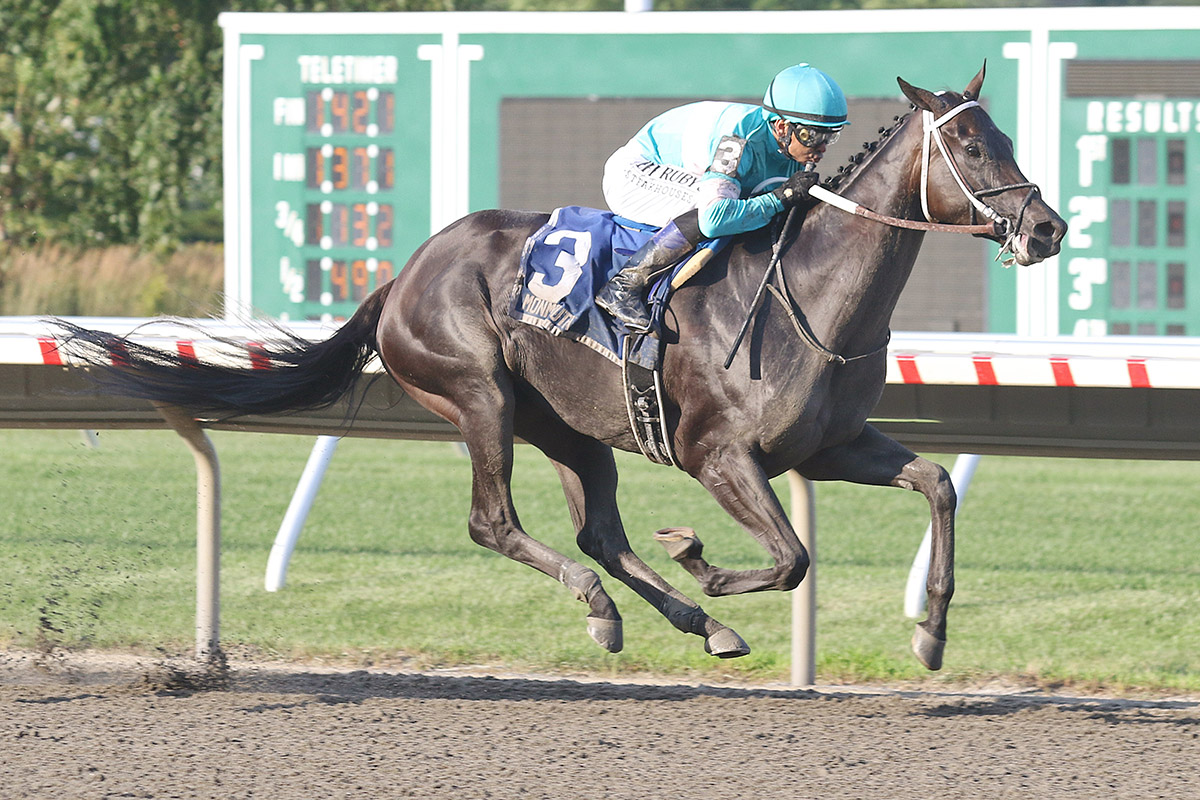 Midnight Bisou, arguably the top older filly or mare in North America, delivered on her pari-mutuel promise as the 1-20 favorite as she drew clear though the lane under regular rider and Hall of Famer Mike Smith to take the 73rd edition of the Grade 3, $150,000 Molly Pitcher Stakes by a widening length on the Haskell Invitational undercard on Saturday at Monmouth Park.

With the win, the Bloom Racing, Madaket Stable and Allen Racing color bearer remained unbeaten in eight tries at the distance of 1 1/16 miles on dirt and upped her bankroll to $2,870,000 when she finished up in 1:43.55 on a fast track on a brutally hot and humid evening.

Coach Rocks wound up 5¼ lengths in front of Cosmic Burst. Breaking Bread and Sun Studio rounded out the field.

“She’s just a true blessing and I just so much appreciate the team and how they feel about her, and how Mike Smith handles her, and the confidence that everybody is showing in her is very special,” said Hall of Fame trainer Steve Asmussen. “Her race today was beautiful. The hard part was us showing patience. We were very anxious. She’s a very special filly and you want everything to go well.

“But she was great in the post parade, beautiful in the gate, and she traveled very well under Mike the whole way and finished very well. Pure professionals overcome obstacles. She’s better equipped to handle them than the people.”

Smith was also impressed with Midnight Bisou, who now has a winning streak of five consecutive graded stakes races.

“She was a little aggressive early on and that’s probably because of the slow pace,” Smith said. “I thought about pulling out from in behind early but I didn’t want her to take off early. There was still plenty of race to go so I decided to wait. When I saw my opening she really responded.”

In other stakes action, the 7-year-old War Story lived up to his name, emerging victorious from a thrilling battle through the stretch with Bal Harbour to take the 41st edition of the Grade 3, $200,000 Monmouth Cup by just a head.

Imaginary Stables and Glen Ellis’ War Story, who is trained by Jorge Navarro and was ridden by Luis Saez, rated off the pace-setting Coal Front, the 5-2 favorite in the field of six, to the quarter-pole. Once into the lane Bal Harbour struck the front and then War Story came right to him and engaged him all the way to the wire as those two left the rest of the field in dust.

“The name says what he is. What a warrior,” said Navarro. “He’s the only one from (2015 Haskell winner) American Pharoah’s class of 2015 that’s still going. It’s amazing to have a horse like this still going around.  You don’t see that anymore.

“It wasn’t an easy race. Not at all. We had home court advantage. He likes this track. What a big race he ran. He’s got a ton of heart and a ton ability, still at his age. He wants to do it. He’s a happy animal.”

Saez was also impressed with his mount and said, “It was a pretty clean trip.  I broke Sharp and wanted to be pushing the favorite. When that other horse came to us (Bal Harbour) he really dug in and didn’t let him by”.

In the 72nd running of the Grade 3, $150,000 Oceanport Stakes, Skeedatle Stable’s Just Howard made his first trip over the Monmouth turf course a winning one, as he dug down courageously through the lane to just get his head in front of Divisidero at the wire and complete the 1 1/16 miles in 1:42.62 on firm footing.

“My horse showed nice determination in the stretch. He’s a cool horse and he deserved a win. He’s been sitting on a win for a long time. It was a nerve-wracking day, but we got through it,” said trainer Graham Motion.

Just Howard, who two starts back was third in the Grade 2 Dixie Stakes at Pimlico, notched his first score since an allowance win at Laurel almost one year ago. But the connections had to survive an objection by Jevian Toledo, the rider of Divisidero, who claimed interference.

“The plan was to stalk today and once those two went on I was able to find a good spot and save ground,” said winning jockey Trevor McCarthy. “And when I heard Divisidero start to make his move I came out and we were just able to outkick him. He’s been keeping good company and going against tough horses especially in the Dixie. So we’re really happy to get this win.”

In the Grade 3, $150,000 WinStar Matchmaker Stakes, it was the Irish-bred I’m So Fancy who made every pole a winning one as she proved best of the three fillies and mares completing the turf test at 1 1/8 miles.

Owned by Lael Stables and trained by Arnaud Delacour, she shook free entering the far turn, and then held on late to stave off a fast-closing and favored Competitionofideas and win by a neck.

I’m So Fancy, making only her third start in America, paid $5.80 and won her second straight stakes race and fifth overall lifetime.

In addition to the trophy the winning owner gets to choose a future date for I’m So Fancy with one of three designated WinStar stallions, Yoshida, Audible or Paynter. The runner-up has second choice and the third place finisher gets the remaining stallion.

In the $75,000 Wolf Hill Stakes run at about 5 ½ furlongs on the grass, it was Justaholic who dashed home first in 1:01.37, one length ahead of the Jason Servis-trained Fig Jelly.

Justaholic, ridden by Jose Ferrer, sat third in the early going, made a three-wide move at the top at the stretch and wore down his rivals through the lane. Fig Jelly was 2¾ lengths better Mai Ty One On.

“He’s just an amazing horse. It’s just a great feeling. It’s his second race back and they move up from that,” said trainer Tom Clark. “He had some time off from a foot issue, but he’s come back great. It’s hot but I’ve raced in hotter. They all have to run in it too so it’s a level playing field.”