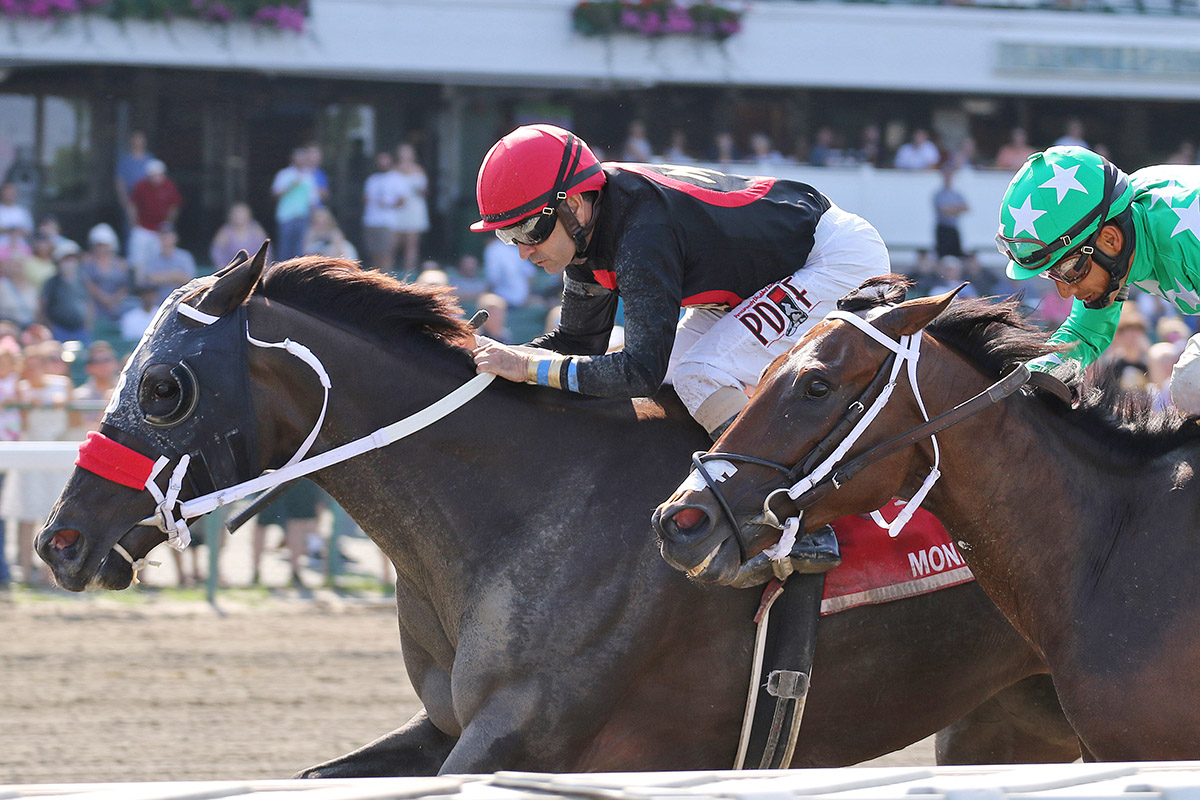 Heading Home returned immediate dividends off the claim for owner Mike Napoli and trainer Kelly Breen, staging a prolonged stretch run before finally surging at the wire for a neck victory over Diamond Play in the $75,000 Jersey Girl Handicap on Sunday at Monmouth Park.

The race for Jersey-bred fillies and mares, originally scheduled for a mile on the grass, was switched to the dirt at the same distance.

“I was concerned when it came off the turf because I do believe she is a better horse on the turf than the dirt,” said Breen, who recorded a natural training triple on the card by winning the seventh, eighth and ninth races. “But she had been breezing so well for us on the dirt and I reiterated that to Joe Bravo in the paddock. I told him `I know she’s a turf horse but she has been working good for us, so do your thing.’

“He did what he had to do. He rode a nice race, saved ground, got her to the outside and she showed some class. This is part of the reason we claimed her.”

Napoli plunked down $22,000 to take the 5-year-old mare out of her last start on May 18, and Breen’s intention was to keep her on the grass, where she now sports a 4-3-3 line from 14 career turf starts. She is 0-for-6, with only one third-place finish as her best showing, for her career on the dirt.

Sent off at 2-1 Heading Home stayed in a stalking position in third behind early leader Ebony Ball and the chasing Diamond Play. When 8-5 favorite Crazy Daisy missed the break there was no pace in the race, resulting in fractions of :25.44 through the opening quarter, :49.60 to the half and 1:13.56 for three-quarters.

“I had plenty of horse from the start. She broke great,” said Bravo. “With a turf horse you never know how she is going to handle the dirt but Kelly had her ready and she was pretty much in control the whole race.

“The times had me worried because they were going so easy. But once I got her to the outside I was confident she would get it done.”

Bravo moved Heading Home to the outside around the final turn, with Diamond Play opening a clear lead and looking strong after overtaking Ebony Ball. But Bravo’s rousing stretch drive made the difference.

Time for the mile was 1:39.49. Ebony Ball finished 5¼ lengths behind the top two in third.

Breen, who won the Monmouth Park training titles in 2005 and 2006, is now in second place in the training standings with 15 winners from 42 starters.

A year ago, Breen managed to pull a similar move with Drop Dead Red, claiming her for $25,000 and then winning the Politely Stakes with her in her next start.

Racing resumes at Monmouth Park on Friday with a nine-race card. First race post time on Friday is 1:15 p.m.