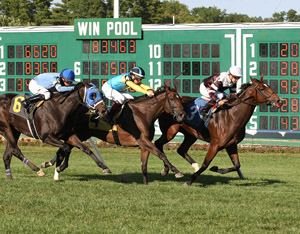 Even after 56 years as a trainer, James J. “Jimmy” Toner says he still is never quite sure how a horse will return following a lengthy layoff.

That’s why Toner was “thrilled” to see Hawkish turn in such a sharp effort in the Grade 2 Appleton Stakes at Gulfstream Park on March 29 following nine months on the sidelines – a race that sets up the 4-year-old gelding nicely for the $100,000 Cliff Hanger Stakes that headlines Monmouth Park’s opening day card on Saturday, May 4.

Monmouth Park’s 61-day meet kicks off with an eight-race program that will complement simulcasting of the 145th Kentucky Derby. A special first race post time of 1:45 is set for Saturday, with gates opening at 8 a.m.

The 41st edition of the Cliff Hanger, to be contested at a mile on the grass, is the first of 61 stakes races worth $7.1 million that are on tap for the meet.

Hawkish, who won the Grade 2 Penn Mile at Penn National last June, has the ability to start that robust stakes schedule in style after finishing second by a half-length to Dr. Edgar in the Appleton Stakes.

“When you stop on them, give them time and bring them back, you always hope that they come back with the same energy and form that they had previously, but you never really know,” said Toner. “So we were thrilled with his effort. The horse who beat him is a legitimate horse who had a win over the track. So we were very pleased with the performance. You kind of hope for that kind of effort when they come back and he gave it.”

A son of Artie Schiller-Bridal Memories by Unbridled, Hawkish owns a 3-1-0 line from six career starts with earnings of $406,900.

Unraced at 2, Hawkish got off to a quick start during a 3-year-old campaign that saw him win three of his first four starts, with those victories coming at three different racetracks.

Following his victory in the Penn Mile at Penn National, Toner tried the Grade 1 Belmont Derby at a mile and a quarter last July 7, coming away with the realization that Hawkish is at his best at eight furlongs.

“At the time I thought he might be able to stretch out, which is why I pointed him for the Belmont Derby,” said Toner. “I guess at that point we realized he is a miler. I was going to freshen him up after that for the fall but he seemed to tail off and I wasn’t happy with the way he was training. We just decided to shut him down then. Fortunately, he came back strong.”

The Cliff Hanger will go as the seventh race, with a scheduled post time of 5:10 p.m. The live racing and simulcast schedule will be part of the “The Shore’s Biggest Derby Party,” sponsored by vineyard vines.

The Moroccan Sheepherders will perform “On the Green” from 1:30 p.m. to 5:30 p.m. and Family Fun Day activities will be on tap with free clowns, face painters, a bounce house and pony rides from 1 p.m. to 5 p.m.

In addition, the Monmouth Park Sports Book by William Hill will be open until 2 a.m.