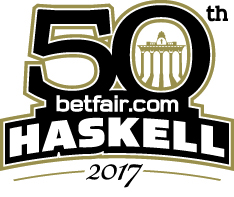 With just hours until the 50th renewal of the betfair.com Haskell Invitational, the seven contenders set to line up in the gate Sunday continue to get ready for their run in the mile and an eighth test for the $1 million purse on Sunday, July 30.

Irish War Cry- Isabelle de Tomaso’s New Jersey-bred galloped a mile and a half this morning at Fair Hill Training Center over their synthetic training track. Battle of Midway- “He went to the paddock for a few minutes this morning, then went and stood in the gate and finished up by galloping a mile and five-eighths,” said trainer Jerry Hollendorfer, who arrived from California to oversee Battle of Midway’s preparations for the Haskell. He schooled in the paddock with the horses in Friday’s fifth race. Timeline- Woodford Racing LLC’s colt galloped a mile and three eighths at Monmouth early this morning and schooled in the paddock this afternoon with the horses for the first race. Practical Joke- William H. Lawrence and Klaravich Stable Inc.’s galloped over the main track in Oceanport this morning, going a mile and three-eighths. He schooled with his stablemate this afternoon prior to the first race. McCraken- Whitham Thoroughbreds LLC’s son of Ghostzapper was the last of the Haskell entrants to hit the track this morning when he galloped a mile at Monmouth at 9:15 a.m. Hence- Calumet Farms’ colt by Street Boss walked the shed row this morning after arriving yesterday from Kentucky. He schooled before the first race today along with Chad Brown’s duo. Girvin- Brad Grady’s colt galloped over the main track at Saratoga this morning and will ship down to Monmouth this afternoon.