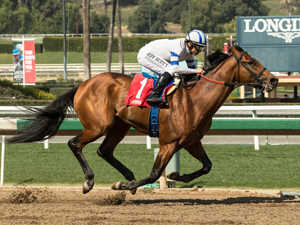 Luis Martinez, the colt’s regular groom who also accompanied him when he won the Grade 3 Ohio Derby in his last start, said that Core Beliefs was happy, relaxed and “strong” following his easy jog once around the oval under veteran exercise rider Findlay Bishop while accompanied by a pony.

“He’s a smart horse and he’s a good shipper. He does everything right,” Martinez said. “He went out on the track today just to stretch his legs and get a look around at the new surroundings, and he did very good.”

Flavian Prat, the leading rider at the recently concluded Santa Anita Winter-Spring meet, will fly from California to ride Gary Broad’s colt, who is a son of spectacular young sire Quality Road out of the Tactical Advantage mare Tejati. It will be a first time partnership for Prat and Core Beliefs, who was unraced as juvenile and has two wins from six starts. In April he finished third behind eventual Triple Crown winner Justify in the Grade 1 Santa Anita Derby.

Martinez, who is overseeing the preparations until Eurton arrives on race day, said Core Beliefs will gallop about a mile and an eighth Thursday morning and visit the paddock on Friday for a schooling session.