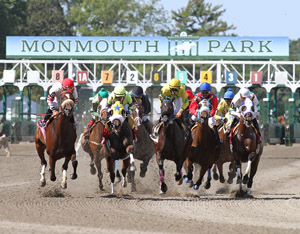 After 60 races at eight different racetracks in a career that began in 2013, trainer Antonio Arriaga is convinced that 8-year-old gelding Chunnel still has something left.

That’s part of the reason that owner Silvino Ramirez claimed the rugged Jersey-bred out of his last start on Sept. 21 for $12,000, he said.

Now they’ll see if they can get a quick return on that investment, with Chunnel heading the field for the featured allowance optional claimer FOR Jersey-breds on Monmouth Park’s nine-race Sunday card.

“He’s not done yet. He always tries, so we thought we’d give it a shot,” said Arriaga. “You know he will be giving his best for you. He’s a fighter.”

A son of English Channel-Empress Gracie by Langfuhr, Chunnel was the beaten 3-10 favorite in his last start in this company, racing then for leading trainer Jorge Navarro. Sunday’s feature, at a mile and 70 yards, carries a purse of $62,500. Isaac Castillo has the mount.

“He’s like an old man,” Arriaga said of Chunnel. “He has his good days and he has his bad days. Hopefully Sunday is one of his good days. We know he loves Monmouth Park.”

Sunday’s card is one of the final four programs left in Monmouth Park’s 61-day meet, with the track offering live racing on Sundays only in October. All-turf racing will be held throughout the month at the Meadowlands on Fridays and Saturdays with the exception of Saturday, Oct. 19, when the 99th Far Hills steeplechase meeting takes place.

“He needs to break sharp and have a clean trip and I think he should be okay,” said the 42-year-old Arriaga, who has been training since 2011. “We just try to keep him happy. There’s not much more I can do. He’s eight years old. What am I going to teach him at this point? He knows what to do. He seems like he is good now. We’ll see.”

Arriaga is the ninth different trainer that Chunnel has had, with Navarro overseeing the horse for his previous 22 starts.

“He has back class. It looks like a good spot,” said Arriaga, who hails from Mexico. “He’s at his best with Jersey-breds.”

Post time on Sundays at Monmouth Park is 1:15. Post time for the all-turf cards on Friday and Saturday at the Meadowlands is 12:30 p.m.