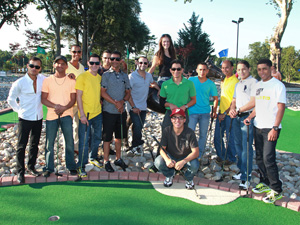 “I’ve always enjoyed Monmouth Park,” said Gryder, who last rode regularly at Monmouth in 2005.“It’s great timing for me and I’m looking forward to getting back there, working hard and hopefully getting off to a good start.I’ll go anywhere to win and do what I have to in order to get the winner’s circle.That’s what racing is all about.”

Gryder, a journeyman whose long list of victories include the 2009 $6 million Dubai World Cup atop Well Armed, has won more than 3,000 races in his career. He has captured riding titles at Churchill Downs, Arlington Park and Aqueduct.

Eddie Castro, the Eclipse Award winner as leading apprentice in 2008, has been a 3-time runner-up in the Monmouth Park rider standings (2007-2009).The 32-year-old Breeders’ Cup winning journeyman was last seen at Monmouth in 2014.

Back to defend his title is Paco Lopez, who took his first Monmouth title at the 2010 Elite Meet, and has equaled that feat every year since 2013.

Also back is Nik Juarez, runner-up in last year standings and leading apprentice the year prior.Juarez, the son of longtime rider turned trainer Calixto Juarez, Nik is a third generation horsemen that has captured some of Monmouth’s top races including the Iselin and Sapling Stakes.

And if that wasn’t enough, throw in the mix Joe Bravo, the 13-time leading rider, who will be a frequent visitor to the Shore racetrack, as will Chris DeCarlo, a Haskell winner and recent victor of the Grade 1 Carter Handicap.