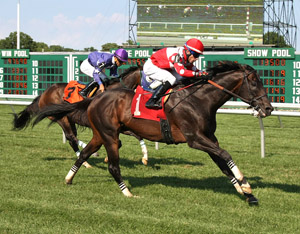 Grade 2 winners Hawkish and Projected head a field of eight turf runners for the $100,000 Cliff Hanger Stakes that highlights Monmouth Park’s season opener on Saturday, May 4 – an eight-race card that coincides with simulcasting of the 145th Kentucky Derby.

Hawkish, trained by James Toner, comes in off a sharp second-place finish in his 2019 debut in the Grade 3 Appleton Stakes at Gulfstream Park on March 29 when he was beaten a half-length by Dr. Edgar.

Projected, owned by Juddmonte Farms and trained by Chad Brown, will be looking to add to his career earnings total of $584,240 in his second start of 2019.

The opening day program kicks off a 61-day meet that features 64 stakes races worth $7.1 million and a daily purse structure that will average approximately $500,000 per day. The stakes schedule is again headlined by the $1 million TVG.com Haskell Invitational on July 20, with the track’s showcase race moving to a Saturday from its normal Sunday slot.

Monmouth Park’s opening card will have a special post time of 1:45 p.m. Gates open at 8 a.m.

Projected, a 7-year-old gelding, has been first or second in 17 of his 26 career starts and earned his Grade 2 victory in the Baltimore/Washington International Club Stakes on Sept. 30, 2017 at Laurel Park.

The field for the 41st running of the Cliff Hanger Stakes, scheduled for a mile on the grass, includes All Right, Harpoon, Mo Maverick, Sand Dancer, Dover Cliffs and Mead Hall. Just Call Kenny is listed as a main track only entrant as well.