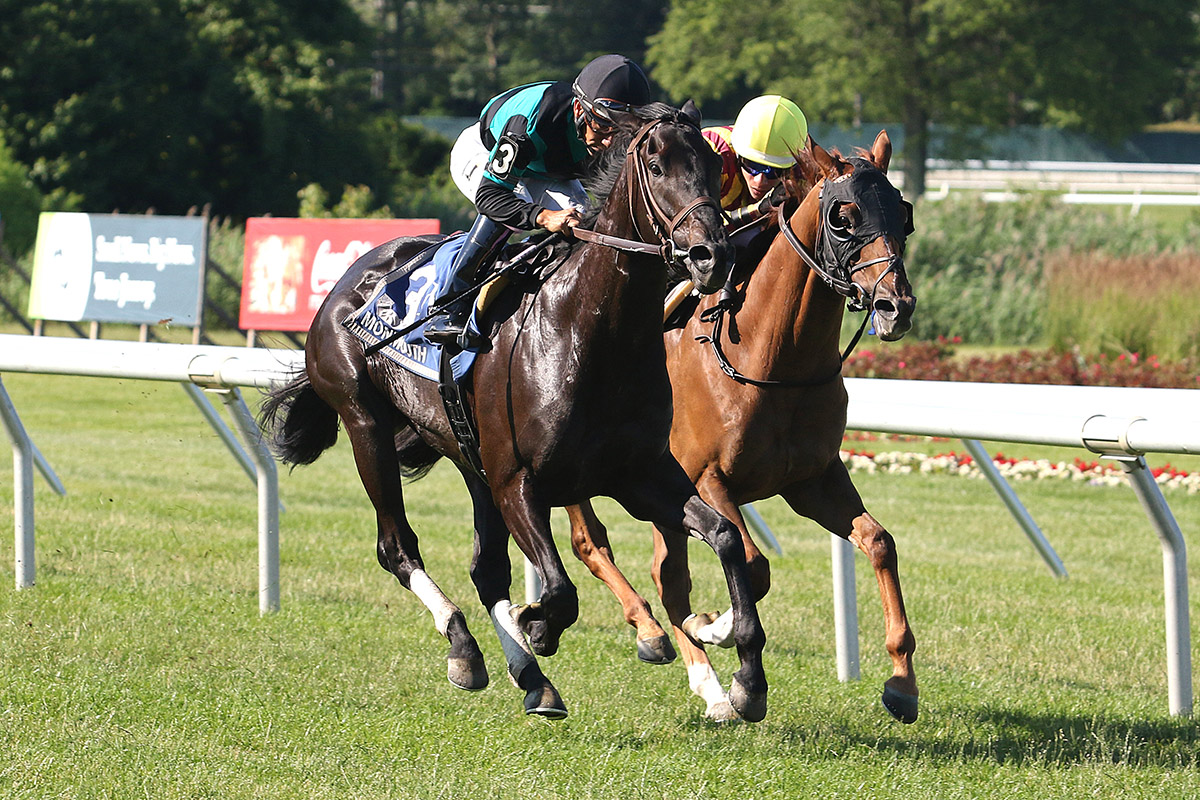 Golden Brown used a stalking trip in a race-long slugfest with Irish Strait before surging in the shadow of the wire to score a half-length victory in Sunday’s $75,000 Dan Horn Handicap for Jersey-breds at Monmouth Park.

Ridden by Paco Lopez, who was content to sit just off the flanks of Irish Strait throughout most of the mile and a sixteenth turf event, Golden Brown recorded his second win in as many starts this year and his fifth in 14 career starts.

Golden Brown and Irish Strait went off as co-favorites at 4-5.

“Paco said he wanted to be head and head with Irish Strait but he said he was too much horse for us down the backside so he let Golden Brown relax a little bit,” said winning trainer Pat McBurney. “When he went into the stretch he went after him again. It was a big, big performance.”

It was another 8½ lengths back to Don’s Marsh in third.

Lopez, who capped a big weekend at Monmouth Park – he won the Grade 1 United Nations and the Grade 3 Eatontown Stakes on Saturday – said he was content to let Irish Strait go after he peeked at the early fractions.

“I stayed behind Irish Strait after I saw how much he wanted the lead,” said Lopez. “It was just the two of us. Nobody else was coming. And I waited and waited until we needed him to kick in and he gave me that little extra we needed.

“There was nobody else in the race and when he went 46-seconds and change and then 1:09.64 to three quarters I thought he was maybe going a little too fast. I just kept following him until we had to go get him.”

Golden Brown covered the distance in 1:40.95 over a firm turf course.

The 4-year-old son of Offlee Wild-Suzee Sunrise by Chester House made amends and turned the tables on Irish Strait after finishing second to him by a half-length in this same race a year ago.

Golden Brown now owns two turf victories in five tries, including a win in the Grade 3 Kent Stakes on the grass at Delaware.

“As it works out, our schedule 13 days from now is another Jersey-bred turf race (the Irish War Cry Handicap on July 6) so if he bounces out of this good I think we’d be looking at that,” said McBurney. “We’ll stay with Jersey-breds for now with him.”