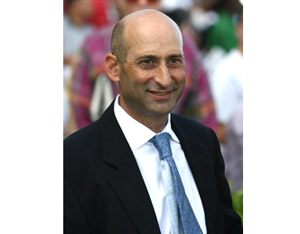 After seeing Too Charming step up in her last race to finally break through with a victory, trainer Tom Albertrani is eager to see if his filly can do it again – and off a two-month layoff.

Too Charming, coming off a Maiden Special Weight score at Tampa Bay Downs, will test the waters of stakes company on Saturday at Monmouth Park in the $60,000 Open Mind Handicap, the feature race on the 12-race card.

A field of 10, including main track only entrant Jump Ruler, has entered the mile and a sixteenth grass race for 3-year-old fillies.

“She ran well in her last start. She looks like an improving sort and this looked like a good opportunity to try her in a race like this,” said Albertrani. “Hopefully, she’ll step up again a little bit. I’m looking forward to seeing if she can and how she handles this.”

Owned by global powerhouse Godolphin, Too Charming needed five races to break her maiden, doing so at Tampa on April 15. Four of her five lifetime starts have been on the grass, with the other an off-the-turf race. All of her starts have been at a mile or longer, with two at nine furlongs.

“She just looked like that type of horse from the get-go, and judging by her siblings it looked like turf and going long was the way she wanted to go,” Albertrani said. “She did have an off-track race and if this one comes off the turf – I know there is some rain in the forecast – it wouldn’t bother us in the least. We’ll see how it goes.”

That off-track race was Too Charming’s second career start on Jan. 3 at Gulfstream Park, when she finished third at a mile and a sixteenth in the slop.

That race and her most recent one are the two times she has shown a willingness to rate after flashing front-end speed in two other starts. Two races back, at a mile and an eighth on the turf at Gulfstream Park, the daughter of Bernardini-Tour Charmant cut the early fractions before fading to seventh.

In her maiden score she rated just off the early speed.

“Her last race worked out just the way we have been trying to get her to run,” said Albertrani. “She was really relaxed. We always felt if she would just relax a little but early on it would make a big difference to her, and it did.”