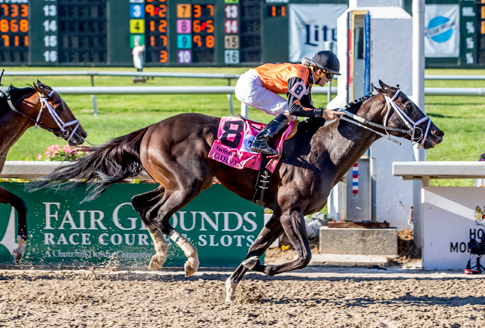 Multiple graded stakes winner Girvin put in his final official breeze this morning as he prepares for his next start in the 50th renewal of the Grade 1, $1 million betfair.com Haskell Invitational on July 30 at Monmouth Park.

The 3-year-old colt by Tale of Ekati went to the track at Saratoga this morning and went five furlongs in 1:01 1/5 over the fast going.

“It was a great work,” said trainer Joe Sharp. “He went along with a workmate and galloped out really well. We’ll have him gallop up at Saratoga on Friday before shipping him down to Monmouth. He’ll gallop over the track there on Saturday and will school in the paddock that day.”

Owned by Brad Grady, Girvin sat near the front end along the backstretch, taking the lead in the top of the stretch, before just missing by a nose behind fellow multiple graded stakes winner Irap in his last start, the Grade 3 Ohio Derby at Thistledown on June 24.

On his road to a start in the Kentucky Derby, the son of the Malibu Moon mare Catch the Moon won the two main preps at the Fair Grounds, the Grade 2 Risen Star and the Grade 2 Louisiana Derby, both in late-running fashion.

Girvin will look to take home the Haskell trophy against some of the top 3-year-olds in the country in the mile and an eighth event. New Jersey-bred Irish War Cry leads the charge after finishing second in the Belmont Stakes. He won the Grade 2 Holy Bull at Gulfstream Park in February and the Grade 2 Wood Memorial at Aqueduct in April.