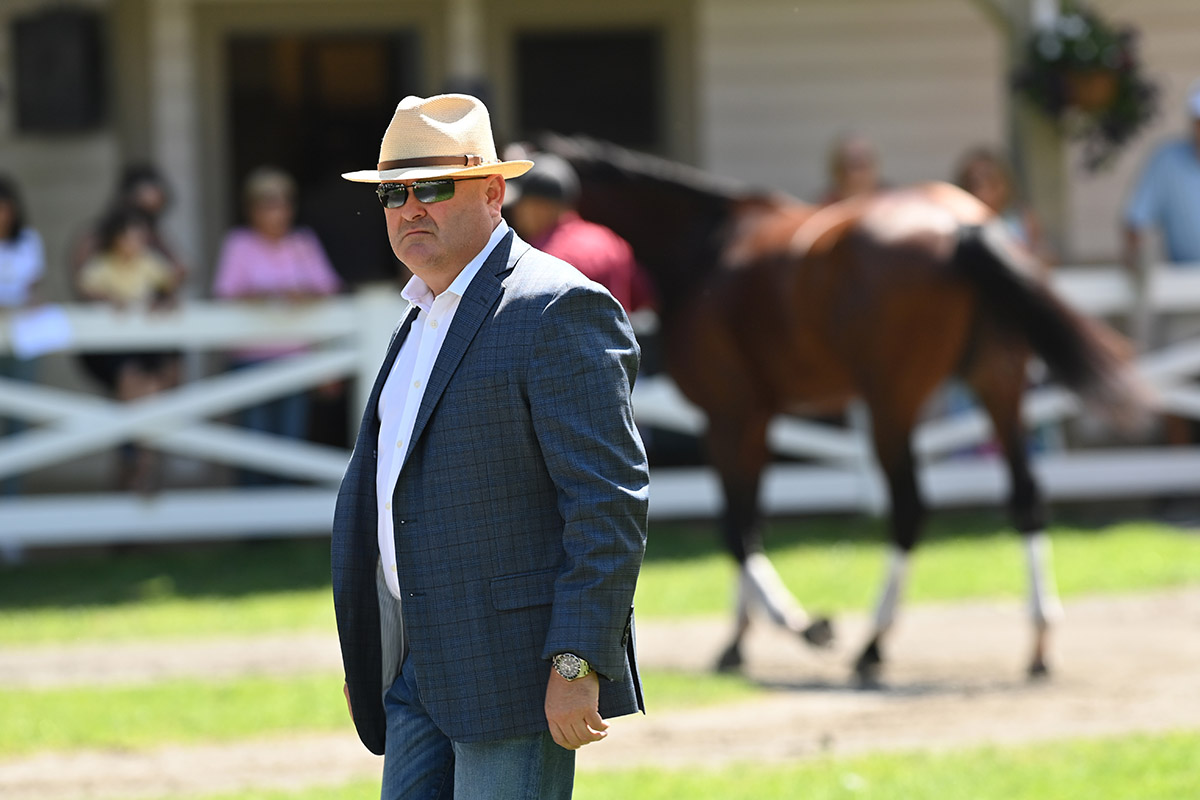 Trainer Danny Gargan doesn’t ship very often to Monmouth Park but when he does it’s with a purpose. The primary purpose this weekend is to see if Dakota Gold is Breeders’ Cup Juvenile Turf worthy.

An impressive first-out winner at Saratoga on Sept. 2, the New York-bred Dakota Gold will make his second career start in Sunday’s $500,000 Nownownow Stakes, scheduled for one mile on the turf on the closing day of the 55-day meet.

The purse for the Nownownow Stakes was increased from $150,000 to $500,000 in an effort to entice 2-year-olds to use the race as a final stepping stone to the Breeders’ Cup Juvenile on Nov. 5 at Del Mar.

“If he can run first or second this race the sky is the limit as to where he goes next,” said Gargan. “I think it’s a great idea to make this race this big and with the timing of it (40 days before the Breeders’ Cup Juvenile).

“If you’re first or second in this race that would probably give you the earnings you need to get into the Breeders’ Cup.”

Dakota Gold, a son of Freud-Dakota Kid by Lemon Drop Kid, was impressive in his debut, winning at 5½ furlongs in Maiden Special Weight company by 4½ lengths in a race that was taken off the turf.

“We trained him on the grass, so that’s where we were looking to get him started,” said Gargan. “He’s a nice quality colt. Just a beautiful animal. We ran him against open company the first time because the timing was right and we wanted to get a race in him. We had him ready.

“When it came off the turf we knew he had also worked well on the dirt so we were fine with it. Sunday he will run either way (on or off the grass).”

Dakota Gold is owned by Reeves Thoroughbred Racing (Dean and Patti Reeves), which was also a part-owner of Tax, the gelding who won the 2019 Jim Dandy for Gargan and also gave the Louisville, Ky., native his first Kentucky Derby starter that year.

“If Dakota Gold runs first or second I’d be hard-pressed not to go to the Breeders’ Cup,” said Gargan. “Dean Reeves and I have been in the Kentucky Derby together. We’ve run in some big races together. He will take a chance in a big race.

“If this horse runs first or second on Sunday he would have to talk me out of going to the Breeders’ Cup because I think the firm turf in California would suit my horse too.”

Gargan’s potentially-lucrative Monmouth Park weekend will actually start on Saturday, when he sends out Ice Princess in the $100,000 Violet Stakes, the feature race on a 14-race card.

Scheduled for a mile and a sixteenth on the turf, the Violet Stakes may fall victim to rain that is expected to hit the area on Friday. That’s fine with Gargan, since Ice Princess cruised to a four-length win in the slop at Saratoga in allowance company in her last start on Aug. 19.

A 4-year-old daughter of Palace Malice-Happy Clapper by Awesome Again, Ice Princess was a respectable fourth in her only career turf try on June 17 at Belmont Park. She shows a 4-4-1 line from 13 career starts with lifetime earnings of $308,019.

Six other fillies and mares, three and up, are scheduled to oppose her.

“She’s a lightly-race filly. We don’t run her a lot,” said Gargan. “She is actually super sound. It’s not about soundness. It’s more about her body weight and it getting a little too low sometimes.

“She’s a pretty cool filly. I think next year will be her best year because she is starting to grow into herself.”

First race post time for Friday, Saturday and Sunday – the final three days of the Monmouth Park meet – is 12:15 p.m.