Force The Pass, Hawkish Among 23 Nominated For $100,000 Cliff Hanger Stakes On Monmouth Park’s May 4 Opening Card 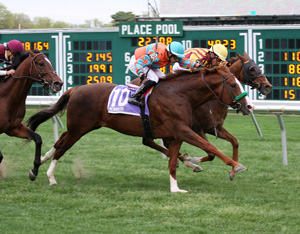 Defending race winner Force the Pass, who has a Grade 1 victory to his credit, and Grade 2 winner Hawkish were among 23 nominations for the $100,000 Cliff Hanger Stakes, the feature on Monmouth Park’s opening day card on Saturday, May 4.

The 41st running of the Cliff Hanger will be contested at a mile on the turf as Monmouth Park’s 74th season of racing gets underway on Kentucky Derby Day. The track will have a special post time of 1:45 for the opening card.

Force the Pass, with lifetime earnings of $1,314,154, captured the Cliff Hanger Stakes last year by a nose over Irish Strait. Owned by Colts Neck Stables, LLC, Force the Pass is now trained by Jorge Duarte, Jr. after previously being under the care of Alan Goldberg.

The 7-year-old has not raced since September. In 2015 he won the Grade 1 Belmont Derby.

Hawkish, trained by James Toner, is coming off a sharp 2019 debut that saw the 4-year-old gelding finish second by a half-length in Grade 3 Appleton Stakes at Gulfstream Park on March 29. He captured the Grade 2 Penn Mile last year.

Projected, a Grade 2 winner who was a close third in the Grade 2 Monmouth Stakes last year; Blacktype, just $26,665 shy of becoming a millionaire; Grade 3 winner Golden Brown, fifth in last year’s Grade 1 Haskell Invitational. and Mo Maverick, winner of the 2017 Lamplighter Stakes at Monmouth Park, are among the other notable horses nominated.

The TVG.com Haskell Invitational, which annually attracts the sport’s top 3-year-olds, again serves as the highlight of the racing calendar. The Haskell Invitational is moving from its traditional Sunday slot to Saturday, July 20, and anchors a card with six stakes races that day.

The full list of horses nominated to Cliff Hanger Stakes:

Hit It Once More