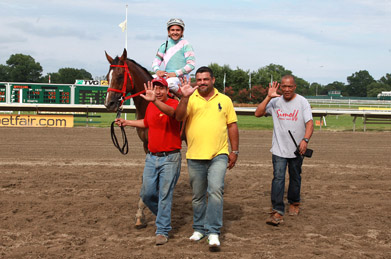 Oceanport, N.J. – Monmouth Park’s leading trainer Jorge Navarro set the all-time record for most wins in a day with five victories, capping it off with Fire Mission’s victory in Sunday’s feature.

“I want to thank my owners and my staff in the barn,” said Navarro, who’s been top trainer at the Oceanport racetrack for the past four seasons. “They do everything. It’s truly an amazing honor.”

Al and Michelle Crawford Racing’s Fire Mission sat off the early speed before swinging out wide and battling the leader Gin Makes Ya Sin, grabbing the victory by three quarters of a length.

“I was just watching the leaders in front of me and waited,” said winning jockey Nik Juarez. “I was able to make a move to the outside and he just grinded all the way to the line.”

Live racing continues at Monmouth Park on Friday, July 28 – gates open 11:30 a.m., first post 12:50 p.m.  As always, the racetrack is open seven days a week for simulcasting from across the country and around the globe.