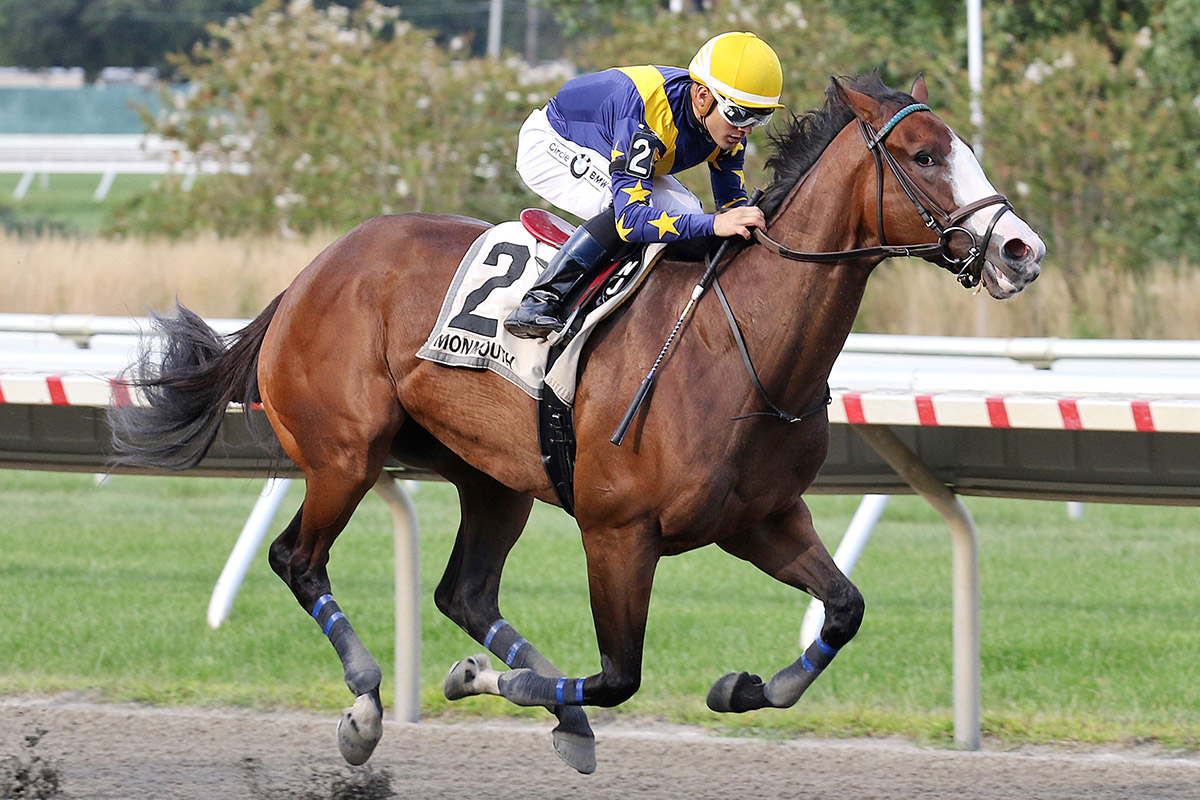 Trainer Ben Colebrook could not have asked for a more perfect bounce-back race for Fancy Dress Party than the one the speedy filly turned in to capture Sunday’s Miss Woodford Stakes at Monmouth Park.

A victory, and a rather easy one at that, with jockey Nik Juarez saving plenty in reserve for Fancy Dress Party’s next start in the Grade 2 Raven Run Stakes at Keeneland on Oct. 19.

Fancy Dress Party, who scored by a measured 1½ lengths, shared the spotlight on the 13-race card with the ultra-consistent First Deal, who won the co-featured Decathlon Stakes by 2¼ lengths.

Fancy Dress Party, now 5-for-6 lifetime, was coming off a last-place finish in the Grade 1 Acorn Stakes on June 8 at Belmont Park. Prior to that she won the Grade 3 Beaumont Stakes at Keeneland.

She acted the part of the only graded stakes winner in the field, too.

“When Mardi Gras wanted to go for the lead Nik Juarez did the right thing and sat off. When it was time to go he went,” said Colebrook. “It looks like he saved us quite a bit of horse for her next one because he eased up on her late and let her cruise to the wire. That was all she needed. This race was a good spot because it gave us the right timing before her next start at Keeneland.

“We’re just happy to get her back into the winner’s circle. She loves to win. I don’t know what happened at Belmont in her last race. There were a lot of really talented fillies in that race. We’re back on track with her and happy about that.”

The 3-year-old daughter of Munnings-The Schvagen by Matty G, a $280,000 yearling purchase, sat off the flanks of Mardi Gras through an opening quarter of :21.47 and through a first half in :44.85 in the 5½ furlong Miss Woodford Stakes. Coming out of the turn she opened up on the field, flashing under the wire in 1:03.78.

“The race set up perfectly for her,” said Juarez. “I know she’s a quick filly but to give her something to track was the best possible scenario for her. Basically it was just waiting to push the button. She drew off well in the lane.

“I really didn’t ask her for everything today. I think she has more in the tank. Ben told me she’s a pretty straight forward filly and really classy. Being in this field he told me to ride her like she was the best horse in the race and I did and she was just that.”

Ka Gee Gee rallied for second. It was another seven lengths back to Oceano Rosso in third.

First Deal, meanwhile, continued to baffle, amuse and delight leading trainer Jorge Navarro, who said the 3-year-old colt is lazy in the mornings but becomes a different animal on race days.

Able to track speedster Dugout through the early stages of the 5½ furlong Decathlon, First Deal drew off easily when asked by jockey Hector Diaz, Jr., winning by a widening 2¼ lengths over Dugout.

The son of Turbo Compressor-Afleet Memories by Afleet Alex covered the distance in 1:02.84, returning $3.60 to win.

First Deal now sports a 6-2-1 line from nine career starts, all this year, and has won three straight races. His first start was in a $16,000 maiden claimer.

“We’ll see where we go from here. I don’t know where I’m at with this horse,” Navarro said.

After winning the Jersey Shore takes in his last start, First Deal developed an abscess, leaving Navarro to doubt whether the colt would make it to the $75,000 Decathlon Stakes.

“This one I have to credit my staff for,” he said. “He wasn’t even going to make this race. He had an abscess coming out of his last race. I couldn’t treat him much and he missed a workout. This is all because of my team. They came up to me and said `run him. He’s ready.’

“I was worried about missing the workout, but my staff insisted that we take a chance with him because they said he was doing good again.”