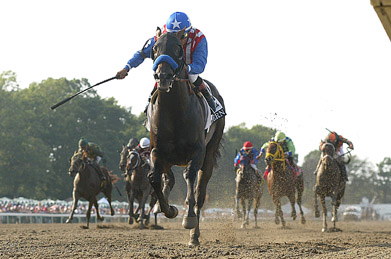 The 49th renewal of the Grade 1, $1 million betfair.com Haskell Invitational is quickly approaching with just 10 days to go until Monmouth Park’s marquee event on July 31.

The field for this year’s Haskell Invitational is rapidly taking shape, led by Kentucky Derby winner and 2-Year-Old Champion Nyquist, who is making his first start since the Preakness.

Taking on the Derby champion is a pair of Kentucky Derby rivals looking for revenge in the Haskell. Gun Runner, who finished third in the Derby and is trained by Steve Asmussen, is coming off a win in the Grade 3 Matt Winn Stakes at Churchill Downs on June 18. Prior to the Kentucky Derby, Gun Runner took two Grade 2 events at Fair Grounds, the Risen Star and the Louisiana Derby.

Brody’s Cause, seventh in the Derby and sixth in the Belmont Stakes, is a multiple Grade 1 winner. As a 2-year-old, Brody’s Cause, conditioned by Dale Romans, took the Breeders’ Futurity at Keeneland prior to a third place finish to Haskell rival Nyquist in the Breeders’ Cup Juvenile. He won his final prep for the Kentucky Derby in the Toyota Bluegrass at Keeneland.

Bob Baffert brings another live shot into the Haskell, looking for his record ninth win the event, with American Freedom. The lightly raced son of Pulpit is coming off back-to-back stakes wins in the Sir Barton at Pimlico and the Grade 3 Iowa Derby at Prairie Meadows.

Locally based Eddie Plesa Jr. throws Awesome Slew into the mix. Awesome Slew is coming off a third-place finish in the Grade 3 Pegasus at Monmouth and is 2-for-3 lifetime over the track.

Also calling the Monmouth Park backstretch his home is Sunny Ridge for trainer Jason Servis. Sunny Ridge won the Grade 3 Withers Stakes at Aqueduct and took the Sapling at Monmouth as a 2-year-old.

Select seats are still available for Haskell Day and can be purchased by calling 732-571-5563, visiting monmouthpark.com/haskell, or stopping by the reserved seat ticket booth on the second floor of the Grandstand any live race date.

Clubhouse sections start at $25, while Grandstand seats range from $20-$25. For the Grandstand Balcony seat prices go from $13-$18.

Admission on Haskell Day, which is not included in the reserved seat price, is $8 for the Grandstand and $10 for the Clubhouse. For seniors aged 55 and up Grandstand admission is $4 and Clubhouse admission will cost $5.

The Haskell’s scheduled post time is 5:49 p.m. and will be telecast live on NBC.The entire Haskell Day card will be broadcast live on TVG.