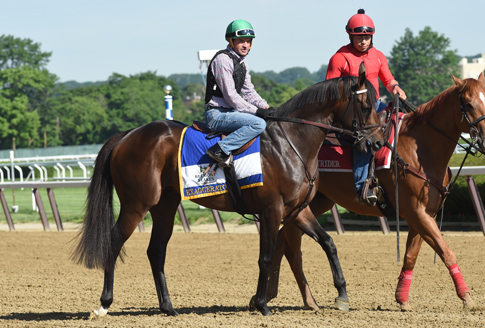 Oceanport, N.J. — Preakness Stakes winner Exaggerator threw his hat into the betfair.com Haskell Invitational ring when his connections told the Monmouth Park racing office that their 3-year-old colt will be headed to the Jersey Shore for this Sunday’s $1 million event.

The betfair.com Haskell will now feature another rematch between Exaggerator and Nyquist, with the latter taking this year’s Kentucky Derby only to have the former turn the tables in the Preakness two weeks later.

Exaggerator ran second in last year’s Breeder’s Futurity to Brody’s Cuase, who will also enter the starting gate for the betfair.com Haskell.

A 3-year-old colt by Curlin out of the Vindication mare Dawn Raid, Exaggerator is one of only two horses (Lani) to run in all three Triple Crown races this year and will be making his first start since the Belmont Stakes.

The Haskell will now feature the top three finishers from the Run for the Roses, as Gun Runner, third in the Derby, arrived on the grounds Tuesday to prepare for the mile and an eighth betfair.com Haskell.

This Sunday’s betfair.com Haskell has a scheduled post time of 5:49 p.m. and will be telecast live on NBC.The race is a Breeders’ Cup “Win & You’re In” event for the $6 million Breeders’ Cup Classic.

There are few reserved seats remaining for the betfair.com Haskell.Tickets can be purchased by calling 732-571-5563 or visiting www.monmouthpark.com.