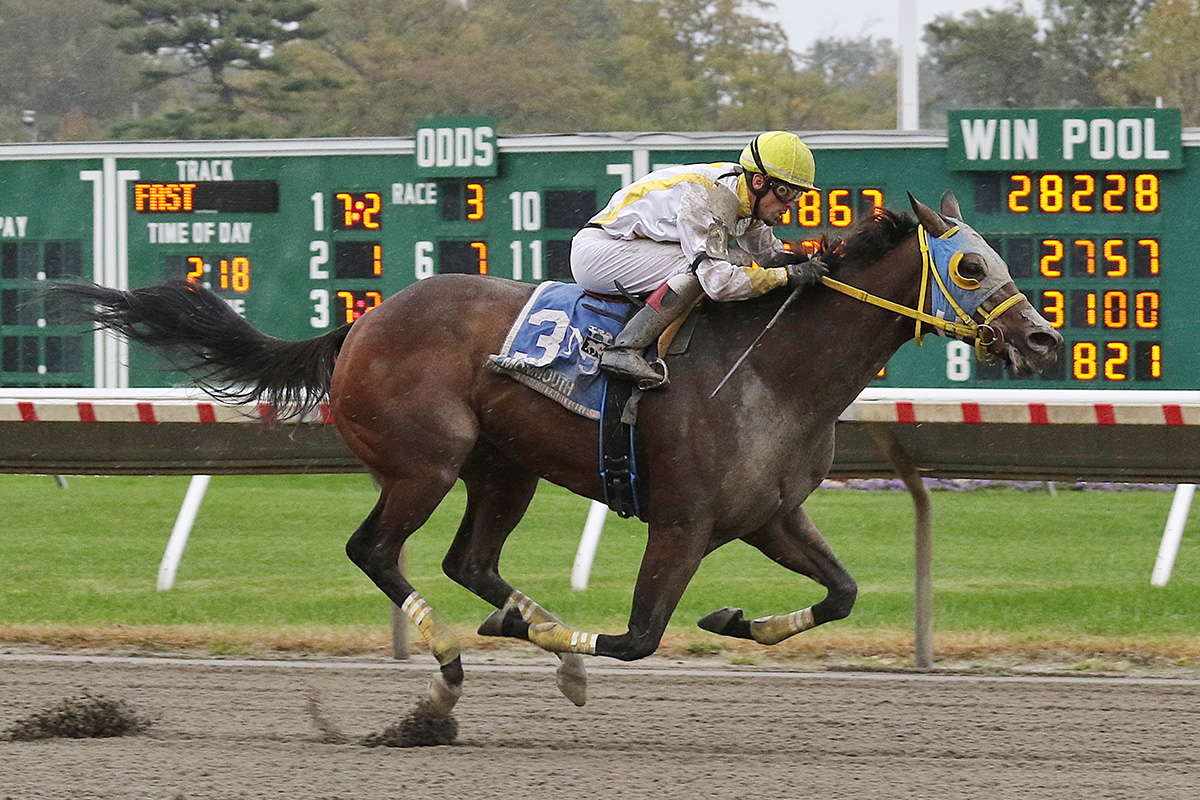 Ebony Ball, claimed out of her last start for $12,500, took advantage of a fast early pace and roared from far back at the top of the stretch to win the co-featured $65,625 allowance optional claimer on Sunday at Monmouth Park.

Trained by Rory Huston, who had the 6-year-old mare until she was claimed from him for $20,000 on June 1 at Monmouth Park, Ebony Ball went out a winner in what will likely be her final race. Huston and Colonial Farms claimed her back on Sept. 21 for $12,500 with the intent of breeding her, he said.

“If this was it for her, she went out in style, said Huston. “The race set up perfectly for her.”

Ridden by Jomar Torres, Ebony Ball covered the 5½ furlongs over a good main track in 1:05.10, roaring past upset-minded Miss Maris to win by 2¼ lengths. It was another 2¼ lengths back Dealer’s Girl in third in the field of seven Jersey-breds.

“They went fast early and that really helped with her running style,” said Torres.

The victory was the sixth in 23 career starts for Ebony Ball, who returned $9.80 to win.

Love Is Your Name, the prohibitive 1-5 favorite in the field of 10 Jersey-breds, broke on top from post 10 and never looked back in cruising to a 5¼-length victory in the $59,375 allowance optional claimer that served as the other co-feature.

Trained by Jose Delgado and ridden by Paco Lopez, Love Is Your Name was also claimed out of his last start for $12,500 by Dave Gruskos.

The victory was the fifth in 15 starts this year for the 5-year-old gelding, who covered the six furlongs in 1:10.32. Longshot Irish Meadow gained the place spot, 1¼ lengths ahead of Papadopalous.

With the victory aboard Love Is Your Name, his only winner from seven mounts on the day, Lopez took the lead for the first time this year in the jockey standings with one day of racing remaining. He leads Nik Juarez, shut out in five mounts on Sunday, 107 to 106.

Thoroughbred racing resumes on Friday, Oct. 25, with an all-turf card at the Meadowlands Racetrack. A total of 80 horses have entered the six races that day.

The Meadowlands will host another all-turf card on Saturday, Oct. 26, before the scene shifts to Monmouth Park for the final card of the 61-day meet on Sunday, Oct. 27.

There will be a mandatory payout of the Jersey Shore Pick 6 carryover of $43,252.04 for next Sunday’s final live Monmouth program of 2019.