Eagle Soars Into Iselin Looking For Another Graded Stakes Score 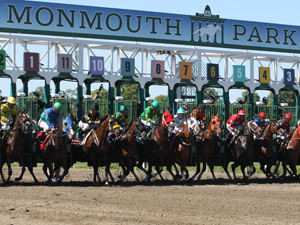 Eagle returns to graded stakes company in search of another Grade 3 victory when he visits Monmouth Park for the first time against four rivals in Saturday’s $100,000 Phillip H. Iselin Stakes going a mile and an eighth.

The 5-year-old son of Candy Ride out of the Mineshaft mare Sea Gull captured the Schaefer Memorial Stakes at Indiana Grand last time out where he sat eights lengths off the lead along the backstretch before unleashing his run around the far turn and getting up in time to score the victory by a head over Fear The Cowboy, who went on to win the West Virginia Governors Stakes next race.

“He’s been doing well coming out of last race,” said trainer Neil Howard. “He has settled in nicely since getting on the grounds. He went to the track today and went over it well.”

Owned by William S. Farish, Eagle has worked four times at his home at Churchill Downs to prepare for Saturday. The latest came on Aug. 22 when he covered four furlongs in :49, eighth fastest of the 59 horses that went that distance on the day. James Graham will get the call for the first time in the Iselin.

To add another graded stakes victory to his already impressive resume, Eagle will have to get by two other stakes winners in the field. Mr. Jordan, for Eddie Plesa Jr., won last year’s Millions Classic Preview Stakes at Laurel Park while Conquest Big E has won two-in-a-row including the Coast Is Clear Handicap last time out at Gulfstream Park.