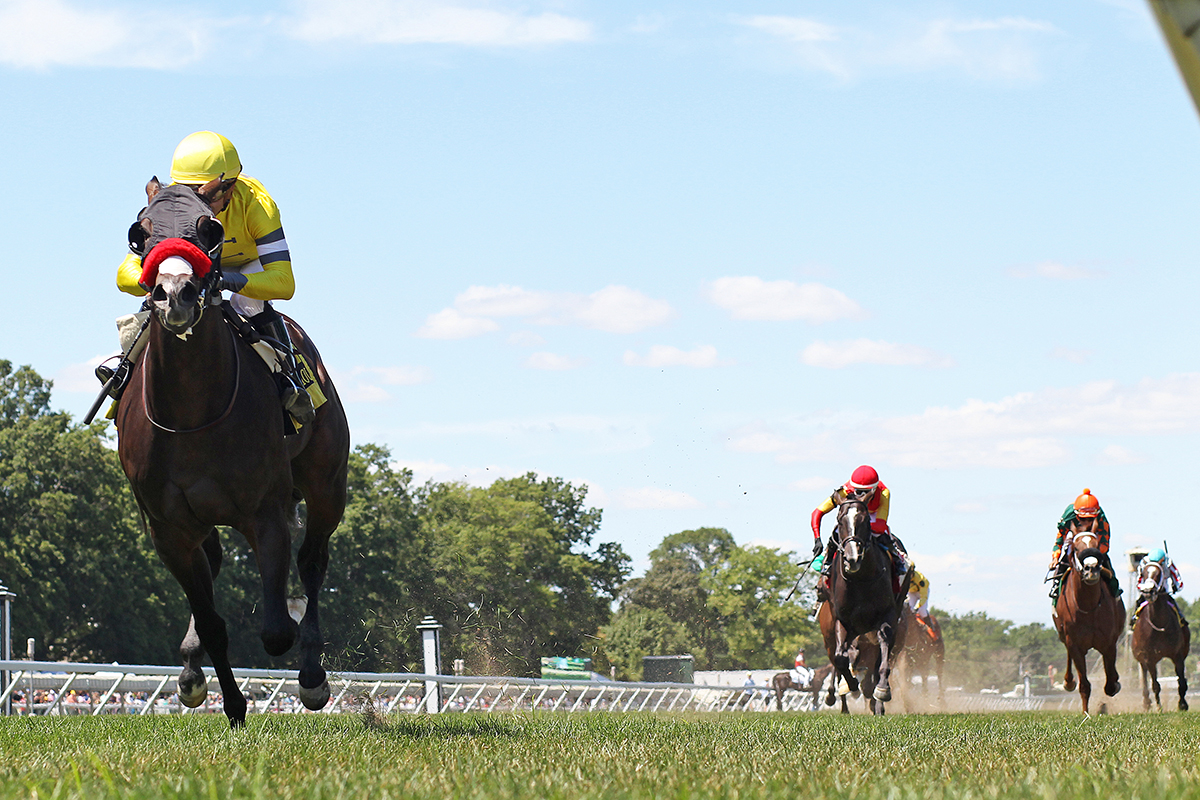 After Sharp Aza Tack’s solid first-out Maiden Special Weight turf score at Santa Anita, trainer Doug O’Neill was looking for a race as a set-up for the $500,000 Global Tote Juvenile Sprint at Kentucky Downs on Sept. 8.

That race was Saturday’s $100,000 Tyro Stakes and it turned out to be little more than a public workout for the 2-year-old son of Sharp Azteca.

Flashing impressive speed early and then even more dazzling power late, Sharp Aza Tack rolled to a 7¼-length win in the 81st edition of the Tyro Stakes to improve to 2-for-2 lifetime.

The winning time for the five furlongs over a turf course labelled as firm was :55.71.

“I decided to ship the horse to Monmouth Park after talking to owner Ron Arakelian (of Rr3 Racing),” said O’Neill. “We circled the Global Tote Juvenile Sprint at Kentucky Downs (at 6½ furlongs on the grass) for him and we thought `what is a good spot between the win at Santa Anita and the Kentucky Downs race?’ The race at Monmouth Park was perfect. I have horses at Keeneland now and we thought the Tyro Stakes would be a good middle ground.”

Sent off as the even-money favorite in the field of seven juveniles, Sharp Aza Tack needed only minor early urging from jockey Jairo Rendon before dusting his rivals.

The decision to try the colt on the grass at the outset of his career, O’Neill said, was because “I didn’t know if he was good enough to stay with some of the top baby sprinters on the dirt in California.”

He won his debut on the turf by 2¼ lengths.

“I would be lying if I didn’t say I was shocked at how well he raced that day,” said O’Neill. “He came out of it great so why would we mess around with surfaces? We didn’t over-think it. It’s not brain surgery.”

Rendon, who has 13 grass wins among his 21-win total for the year, said the only thing he knew about Sharp Aza Tack was from his one running line.

“I didn’t know much about this horse since his only race was in California,” said Rendon. “I knew from the past performances that he is very quick from the gate. So I was expecting the same from him today – and that’s what he did.

“The only thing Doug O’Neill said to me was `he’s a quick horse. Just go.’ Once he got into stride he took off. He won very easily in his second start and he won easily in his first start so it looks like he could be a good one.”

O’Neill said Sharp Aza Tack took another step forward with his performance at Monmouth Park. Power Attack, who tried staying with Sharp Aza Tack through fractions of :21.49 and :44.12, was second, 1¾ lengths ahead of Bart’s Dream.

“There were some good runners in there. I couldn’t have been more impressed or more proud of the way he ran,” said O’Neill. “It’s hard to be more impressive than he was.”