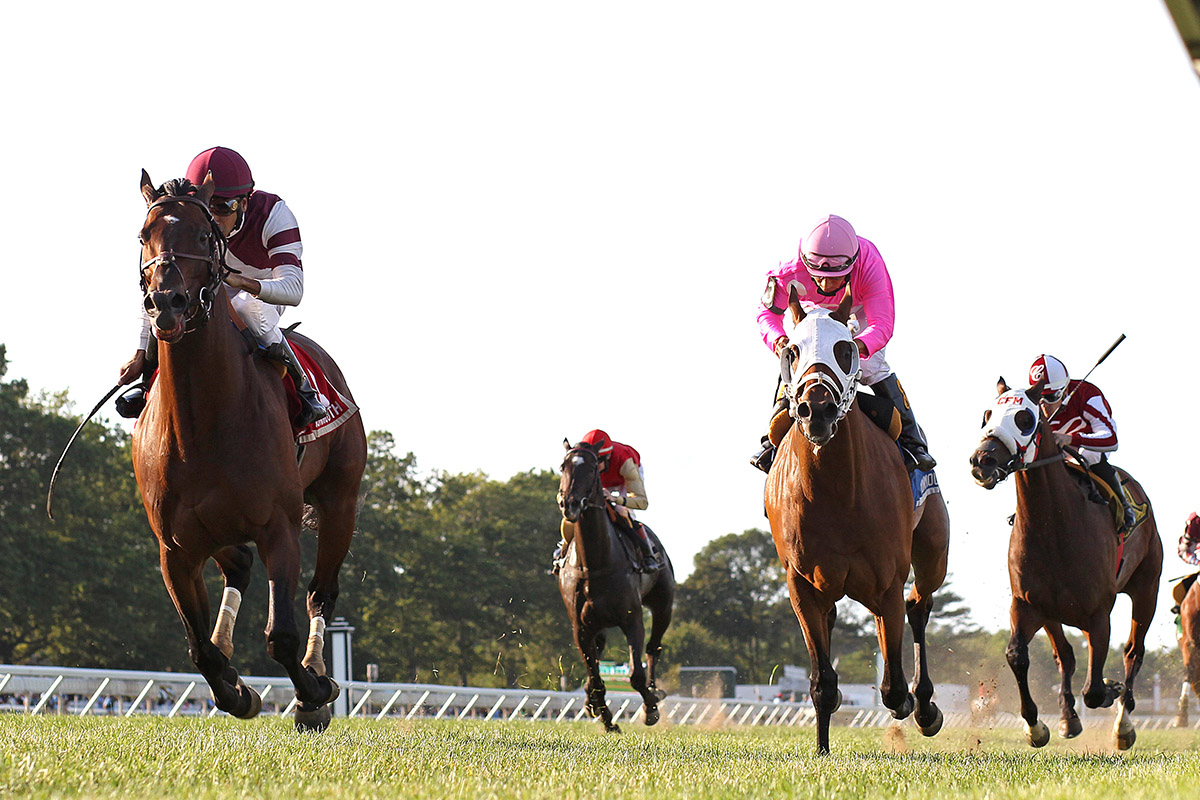 – One horse that was overdue for a return to the winner’s circle and another that visits it regularly highlighted Monmouth Park’s four stakes races on Sunday.

Trainer Jorge Duarte, Jr., who conditions Goldwood, captured a second stakes on the 13-race program when 26-1 shot Big City Bob held on by a neck to win the $100,000 Sapling Stakes for 2-year-olds.

Heavily-favored Micheline recorded a 1¾-length victory in the $100,000 Sorority Stakes for 2-year-old fillies to round out the stakes races.

Divisidero, who has been tantalizingly close to a victory in his past eight starts, finally ended that drought in large part due to a patient ride by Julian Pimental, who replaced regular rider Jevian Toledo for the first time.

Pimental kept Divisidero in last but within contact of the field before slipping off the rail coming out of the final turn and surging past the field. The 7-year-old son of Kitten’s Joy-Madame Du Lac by Lemon Drop Kid then held off even-money favorite Firey Speech to win for the first time since July 7, 2018.

“He’s been so close for a while now,” said trainer Kelly Rubley. “I thought today was a very patient ride and the pace scenario worked out for us. I’m thrilled. We’ve been waiting a long time for this. He shows up every time and he tries but it has been a while between wins.

“He’s a wonderful horse to train. Very consistent. You can’t take anything away from him. Once I saw the half-mile fraction (:46.98) I thought we were okay. Julian did a real nice job of being patient and waiting for the right time to make his move.”

The victory was the seventh in 28 career starts for Divisidero, who pushed his career earnings over the $1.6 million mark with the victory.

Diamond King, trying turf for the first time, set most of the early fractions, with Pimental keeping the field within arm’s length despite trailing for the opening three-quarters of a mile.

“They were going pretty quick early and I think that definitely helped,” Pimental said. “He’s a really nice horse. He won pretty easily, going away. I always felt like I had a lot of horse. I was just biding my time because I had horses outside of me. But when I asked him to go he really took off. He really responded.”

Goldwood, a 5-year-old mare owned by Colts Neck Stables, added the Safely Kept Stakes to her victories in the Incredible Revenge Stakes, the Unbridled Elaine Stakes and the Politely Stakes, all achieved at the current meet since May 18.

“It’s not easy to do what she has done, winning four stakes races in one meet,” said Duarte. “Everything went smoothly with her this summer. She stayed sound and healthy and the races came up spaced at the right time. To get that done everything has to work out perfectly and it did.”

Miss Deplorable was second. It was another 1½ lengths back in third to Knarsdale.

“She was amazing again. Just unbelievable,” said jockey Jose Ferrer, who has ridden Goldwood in all four stakes victories this meet. “She came out of there like a rocket and then she finished really strong. She’s a big filly. I just had to make sure she got her feet on the ground. After that I was gone. She’s just a remarkable filly.

“The way she is running I feel like she is getting better. It’s crazy. Usually a horse like this will tail off a little bit. She just keeps getting better and better. Last time she was on a good turf course and she overcame that. Today she had an outside post and she overcame that. She overcomes everything they throw at her. They came after her today. She was just too good.”

Big City Bob, who broke his maiden on Aug. 11 at Monmouth Park in a 5½-furlong race, had no trouble with the mile distance or two turns, closing stoutly under veteran ride Chris DeCarlo to hold off Skyscanner by a neck. Super John was another half-length back in third.

“He broke with the field a little bit,” said DeCarlo. “I was able to get some position on the turn and then in the backside I left him alone and each time I asked him for something he grabbed the bridle so I knew I had horse. Going to the three-eighths pole they started getting away from him a little bit and I started asking him a little more. He dug in the whole way. He’s just very professional for a young horse. Obviously it was a big step up. It surprised me but it didn’t surprise me that he won like this because I knew he had ability.”

Michaeline, owned by Godolphin LLC and trained by Michael Stidham, came from a third-place finish in her racing debut to win the 64th Sorority at a mile on the turf.

“We’ve liked her for a long time in the mornings,” Stidham said. “That’s why we had the confidence to take her to Saratoga for her first start. She kind of broke a little slow in her first start and got herself way back, but she made a really nice move on the turn to make up a lot of ground and get third. So I knew with that race under her belt, getting just a little education, if she broke good in this race and put herself into the race she would be very tough.

“She was very professional, and that’s what she has shown in the morning. She’s very classy. She has a big, huge stride on her, and she obviously has ability.”