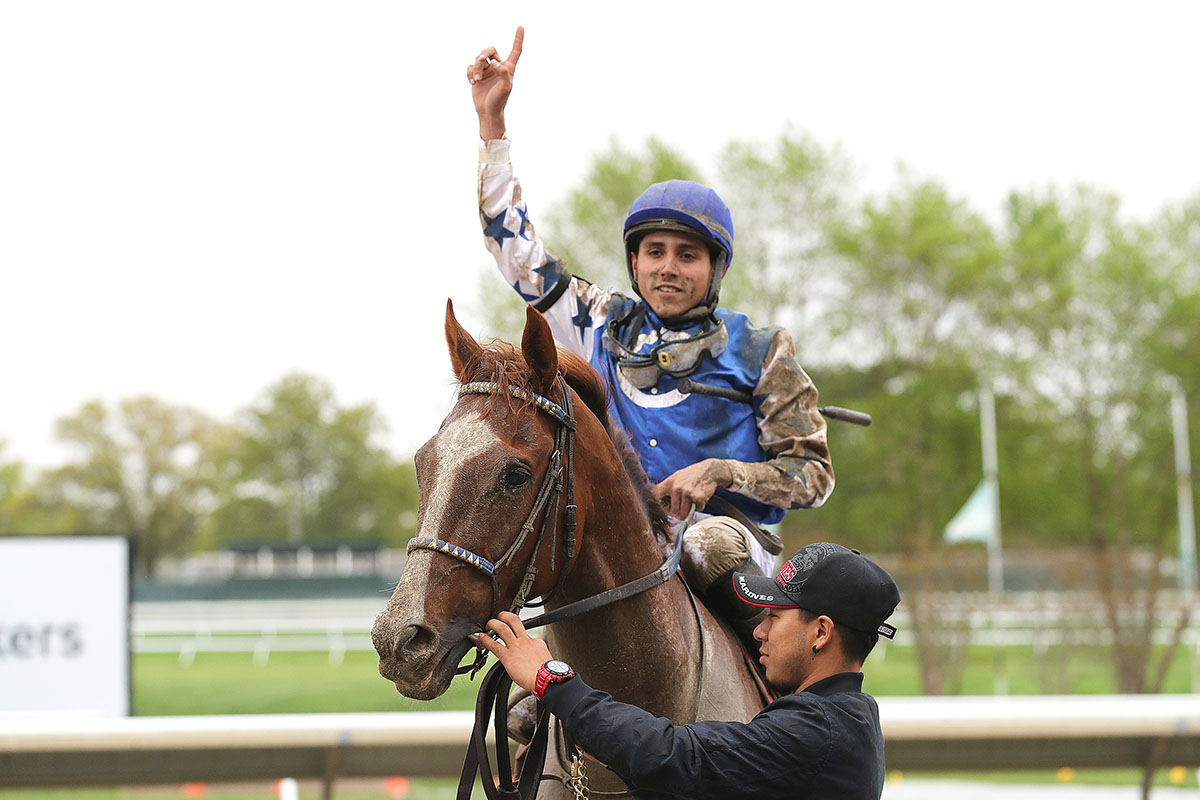 Samuel Marin’s first victory in the United States is one the 20-year-old jockey from Trujilo, Venezuela, won’t soon forget.

Able to swing wide to get clearance around the final turn, Marin and the Ken McPeek-trained Dash Attack prevailed in a grinding stretch duel with favorite Dean’s List and Paco Lopez to score a half-length victory in Saturday’s $100,000 Long Branch Stakes at Monmouth Park.

In his second mount in the United States, Marin secured his first victory – and in a stakes race.

“I am very emotional right now,” said Marin, the leading apprentice at Hipodromo La Rinconada in Caracas, Venezuela, in 2019. “It’s hard to put into words. You only dream about this. I came here for the opportunity. I hope more trainers notice me now.”

Content to sit a close-up fifth on the rail in the six-horse field of 3-year-olds, Marin began edging Dash Attack to the outside after the six furlongs went in 1:13.20 over a sloppy sealed track. When Lopez went inside coming out of the final turn, Marin and Dash Attack went outside. The two hooked up for nearly an eighth of a mile before Dash Attack surged ahead. It was another five lengths back to Smarten Up in third.

Dash Attack’s previous three races had come in the Grade 3 Lexington Stakes, the Grade 2 Rebel Stakes and the Grade 3 Southwest Stakes. All three were off the board finishes after the son of Munnings, owned by Catalyst Stable and Magdalena Racing, opened his career with two victories over off tracks.

“He’s handled the slop well, so it made the task a little bit easier for sure,” said McPeek. “We wanted to find an easy spot and get him back to his winning ways. He started off really good and his last couple of races are what I would call a little dull. He didn’t have the kick and I wasn’t sure if it was because he wasn’t good enough or if he was running a little tired. I wanted to get him back into a little easier spot – though he had to work for this one.”

McPeek said his longstanding relationship with Danny Mellul, Marin’s agent, led to him giving Marin a leg up on his horse.

“The young man rode him perfect,” said McPeek. “I realize it’s his first win in the United States. He needs to give credit to Danny Mellul. Danny and I go way back and Danny is a fine agent. I trusted Danny’s judgment here. Danny said `give the kid a shot and I said sure, let’s do it.’ ”

In the supporting feature, the $85,000 Spruce Fir Handicap, 7-10 favorite Alta Velocita shot the rail and went on to a one-length in the six furlong dash for Jersey-breds.

Trained by Andrew Simoff and ridden by Lopez, Alta Velocita was fresh off a three-month layoff, splashing home in 1:12.07 for her second stakes victory in 20 career starts. The daughter of Il Postino has won eight times from 20 career starts, with six of those victories coming at Monmouth Park.

Longshot I’m Listening was second in the field of nine fillies and mares three and up, two lengths ahead of Bramble Bay.