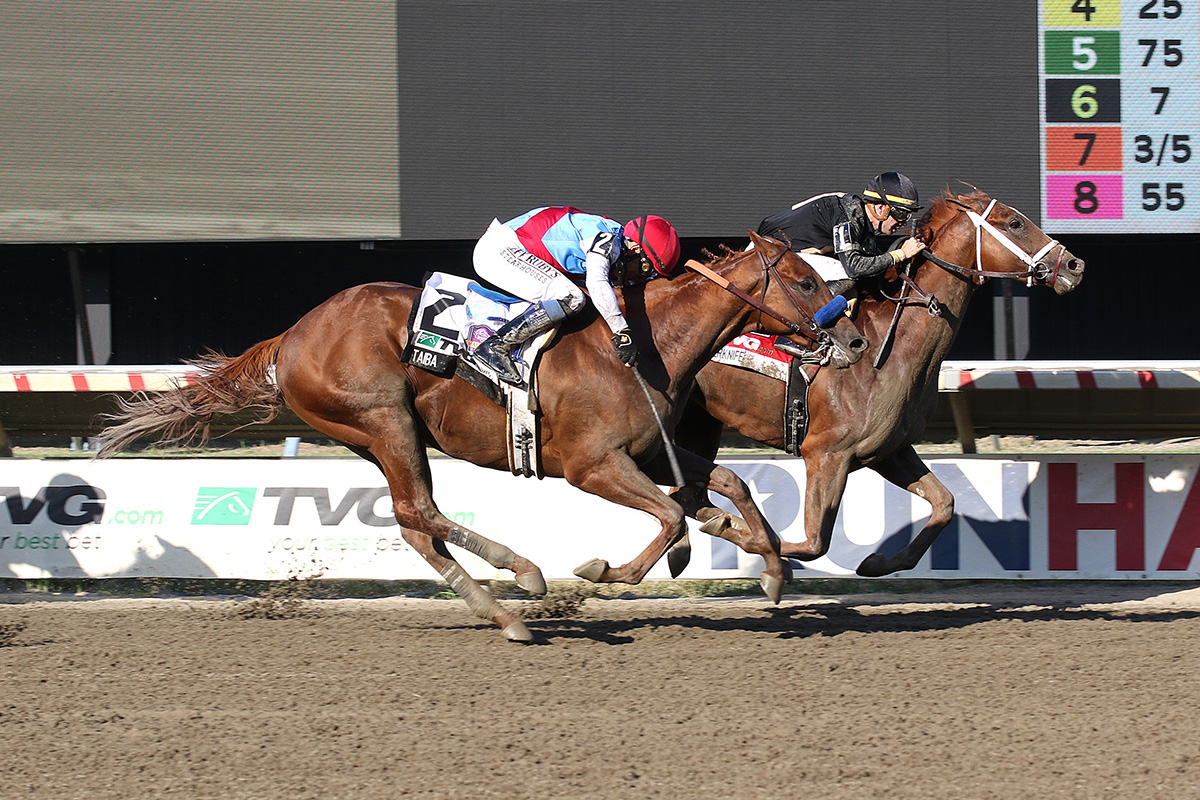 Gold Square’s Cyberknife set a track record while rallying from off the pace and charging up the rail, then held off the late rally from Taiba by a head to win Saturday’s $1 million TVG.com Haskell Stakes at Monmouth Park.

It marked the second Grade 1 win for the son of Gun Runner.

The victory gave reigning Eclipse Award-winning trainer Brad Cox and jockey Florent Geroux their second straight Haskell win in the prestigious test for 3-year-olds after taking the 2021 edition with the adjudged winner Mandaloun.

Cyberknife’s final time of 1:46.24 for the distance of 1 1/8 miles established new stakes and track records. Earlier on the card, the Chad Brown-trained Highly Motivated had eclipsed the track record for nine furlongs set by Spend a Buck in 1985 when winning the Grade 3 Monmouth Cup.

Cyberknife lowered that mark and bested the stakes record of 1:47 established by Majestic Light in 1976 and later equaled by Bet Twice in 1987.

In addition to the Haskell trophy, Cyberknife earned an all-fees paid, guaranteed spot in the starting gate for the $6 million Breeders’ Cup Classic, to be run at Keeneland on Nov. 5.

Al Gold, Cyberknife’s owner, lived in nearby Ocean Township for more than 35 years and has been involved in racing for over 50 years. Cyberknife, a $400,000 purchase earlier this year, won the Grade 1 Arkansas Derby. This is Gold’s first Grade 1 winner.

“This is a very big victory, especially to win this race right in my old back yard,” said Gold, who now splits his time between Saratoga and Delray Beach, Fla.. “The Arkansas Derby was very big, and the Haskell is as well. It’s a very big deal.

“I started betting horses when I was a kid and have owned horses for 40 years. You always have fantasies. You want to win the Kentucky Derby and all the big races, but this is one of the ones I really wanted to win. And we’re on our way to the Breeders’ Cup now.”

Cyberknife, let go at odds of 7-1 by the crowd of 22,138, settled off the pace on the inside under Geroux, advanced inside nearing the far turn, waited for room as they neared the quarter-pole, rallied down the lane to engage 2-1 second choice Taiba, and then dug down deep to win in a photo.

“I think this is his best race to date,” said Cox. “Throughout the race I thought he looked very professional with the way he handled himself. At the quarter-pole, Florent had a nice hold of him and he was loaded.

“He responded well when asked. He flew at the end. I am very proud of him. He was able to settle. Florent took a good hold of him and then made a run up the backside and got him in position along the rail. Then Florent turned for home and he looked like he had a lot of horse. He was just figuring out whether he was going inside or outside of the leader. I think at that time it was Jack Christopher.

“It looked like he made the right decision staying to the inside and we were able to hold off Taiba. It was a big effort. I’m very proud of this horse and our whole staff. He’s been a challenging horse at times. A lot of the good ones are.”

Zedan Racing’s Taiba, the winner of the Grade 1 Santa Anita in just his second start and was making just his fourth career effort, may have been compromised by inexperience.

“He made a gallant effort, that’s for sure,” said Jimmy Barnes, Baffert’s long-time assistant. “He came running. We’re very proud of him. I was hoping to be one-two.

“It’s possible his lack of seasoning might have had something to do with it a little bit. I have to talk to Mike (Smith, the jockey) and see what he thinks. We’ll get him home to California and see how he comes out of the race and go from there.”

Chad Brown, who won all four graded stakes on the undercard and five races on the day to tie the record for most wins on a Haskell day card set by Todd Pletcher in 2016, saddled Jack Christopher. The Haskell was the first time the colt attempted to stretch out from the distance of one mile and navigating two turns.

The distance and the competition proved no problem for Cyberknife, who improved his record to 5-2-0 in nine starts and became a millionaire with the $600,000 winner’s share of the $1,017,500 total purse. He rewarded his backers with $17.60 win price.

Geroux, who is Cyberknife’s regular rider, gave his colt a brilliant ride.

“I had confidence in the horse,” he said. “I had a lot of horse underneath me. I felt like I couldn’t go anywhere. I stayed cool. My target was Taiba and Jack Christopher.

“By the backside you could tell that some of those other horses they were already (out of the race). I pushed the gas a little bit like I did in the Arkansas Derby just to get into him. He responded instantly. He has a turn of foot like a turf horse on the dirt. He can make several moves in the race. We knew that before the race. That’s why I used him a little bit to take good position at the half-mile. From there I stayed quiet until it was time to go.”

Cox said after the race that Cyberknife, who garnered a career-best 102 Beyer Speed Figure, would return to his Saratoga division and, if all goes well, will point to the Grade 1 Runhappy Travers Stakes for his next start.