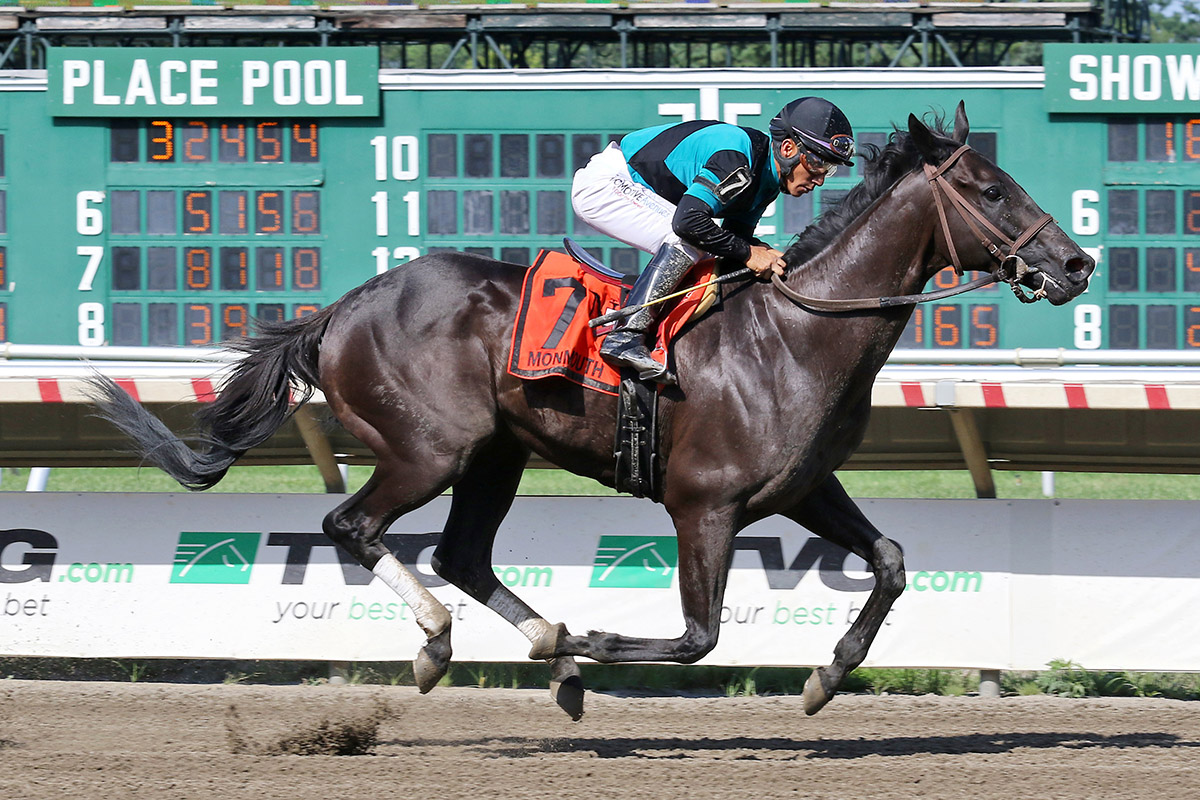 Put Golden Brown in the familiar surroundings of Monmouth Park, and then against Jersey-breds, and good things tend to happen for gritty 6-year-old gelding.

They did again on Sunday, when Golden Brown showed good early speed to work his way into contention and then flashed his strong closing kick as he added to his impressive career credentials with a 2¾-length victory in in the $75,000 John J. Reilly Handicap for state-breds.

Though trainer Pat McBurney remains unconvinced that six furlongs is the best distance for the son of Offlee Wild, it was hard to make that case after he covered the six furlongs in 1:09.

Jockey Paco Lopez hustled Golden Brown out to a stalking third-place position early behind speedster Optic Way and Prendimi and moved to pass Prendimi midway through the backstretch. Through a :44.72 first half Golden Brown then set his sights on Optic Way, collaring the frontrunner in mid-turn and then pulling away as he came out of the turn into the stretch. Optic Way held for second, 1½ lengths ahead of Prendimi.

“He was very good today,” said Lopez. “He broke well this time. But he always runs good, always has heart. (His) last race in Delaware he wasn’t comfortable with the track. But we know he likes Monmouth Park. I had a feeling he would be good today.

“I was able to break third and keep the other two close and when I asked him he gave me everything he had. As he gets older I think he can handle the shorter distances. I just had to get him in position after he broke so well. He knows what to do.”

McBurney missed the race because he was saddling Sweet Sami D in the Caesar’s Wish Stakes at Pimlico (she finished third), and what he missed was this: Golden Brown’s fifth stakes win at Monmouth Park. In 16 career starts at Monmouth, Golden Brown has six wins, five seconds and a third.

Overall, he sports a 9-6-4 line from 29 starts in a career that has seen him win going long, short, in the slop, on the grass and on fast tracks. He has a 3-1-1 line from five career sprints as well

“I did not get to see the race. I was putting a saddle on Sweet Sami D at Pimlico and I looked in my phone and I was getting congratulations so that’s how I knew he won,” said McBurney. “I tried to catch the replay and it never came up and then the race down here ran.

“I was surprised he was as close as everyone said he was. When I looked at the speed figures it looked like we would be in fifth early and have a wide trip, so it’s great that he broke so alertly. That’s two bang-up sprints he has run this year and I’m still not sure six furlongs is what he likes best.”

Golden Brown, who boosted his career earnings to $673,620, paid $6 to win in the field of seven that was reduced by two scratches.

Owned by ABL, Bossone, Donnelly and Schnorr, Golden Brown will go next in the Irish War Cry on July 24 on the turf at Monmouth Park, McBurney said. That race is also against state-breds – and one Golden Brown won a year ago.