Chublicious Wins Reilly ‘Cap Before 15,038 On Saturday At Monmouth 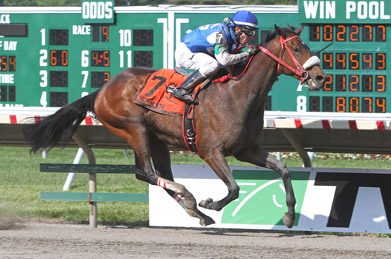 Oceanport, N.J. – David Gruskos’s Chublicious sat off the early speed of Green Gratto and Visionary Ruler before shooting through an opening on the inside and posting a length and a half victory in the $60,000 John J. Reilly Handicap before a throng of 15,038 at Monmouth Park on Saturday.

“I thought he might need a race, but he proved me wrong,” said winning trainer Jorge Navarro.“I was real impressed with that performance.The owner purchased him privately about a month ago.He worked well in preparing for this race and ran so good off the layoff.He’s run well long and short so we have many options with him.”

Live racing continues at Monmouth Park on Sunday, May 29 for a 10-race program.Gates will open early at 11 a.m. for day two of the Food Truck Festival which continues though Memorial Day on Monday.