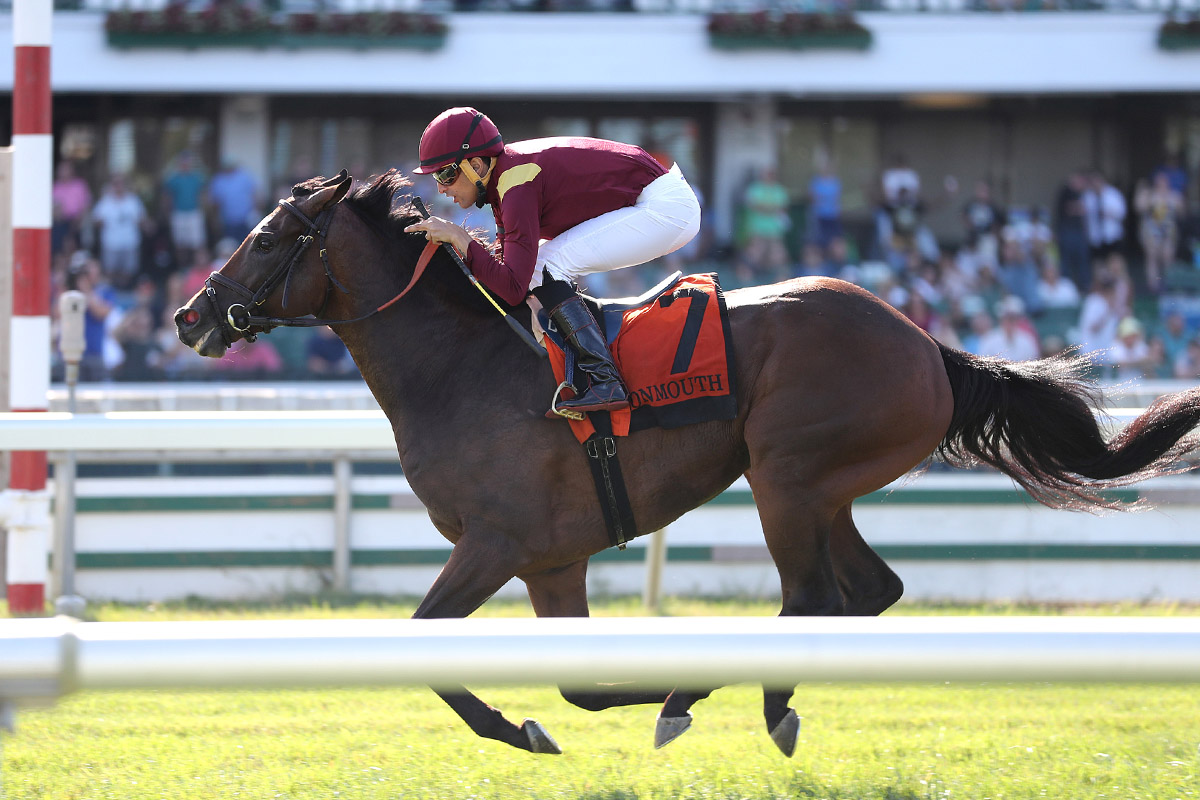 The only graded stakes winner in Saturday’s $102,000 Presious Passion Stake at Monmouth Park acted the part – though it wasn’t quite according to the pre-race script.

L’Imperator, who does his best racing on or near the lead, broke in mid-pack at the outset of the mile and a half race. In the end, it was the best place to be, with the Chad Brown-trainee eventually collaring Oceans Map at the sixteenth pole on the way to a 1¼-length victory.

The winning time over a firm turf course, thanks in part to longshot Kingdom on Paws taking the seven-horse field to the half-mile in a snappy :46.14, was a track record 2:32.67.

L’Imperator, who won the Grade 2 Fort Marcy on May 7 at Belmont Park, paid $2.80 as the overwhelming 2-5 favorite.

“The plan was to be on the lead but he just walked out of the gate,” said winning rider Hector Diaz, Jr. “I didn’t panic. I went to plan B knowing I was on the best horse. I just had to give him the best chance to win from that point. Around the (final) turn I just followed Oceans Map because from that point on it was a two-horse race between the two of us.”

Diaz teamed with Brown earlier in the meet to win the Oceanport Stakes.

A 5-year-old gelded son of Holy Roman Emperor, L’Imperator posted his seventh career win from 15 starts, all on the grass. He is owned by Madaket Stables, Wonder Stables and Robert V. LaPenta.

In his last start, the Grade 2 Bowling Green at a mile and three-eighths at Saratoga on July 31, L’Imperator led all the way until the final eighth of a mile.

“I thought we would be the one on the lead but our horse came out of the gate slow,” said Luis Cabrera, who oversees Brown’s Monmouth Park division. “I was worried at that point because he likes to run on the lead or close to the pace and we were back a bit early. It helped when they went those fast early fractions to the half. It set things up for us. This horse been running really good all year. I know Chad likes him a lot. This horse has a lot of class. We thought he was the best horse going into the race and he proved that.”

L’Imperator made his move just as Oceans Map did coming out of the final turn, wearing down that Gregg Sacco-trainee late. It was another 1½ lengths back to Royne in third.

“My horse was running but I didn’t know it was a track record,” said Diaz. “I didn’t pay too much attention after the early fractions were so quick and we were in a comfortable spot. This is a horse with a lot of class. It’s always nice to ride a good one for one of the best barns in the country.”

In the $100,000 allowance optional claimer, trainer David Jacobson won his first Monmouth Park race since Harlan Punch captured the Grade 3 Philip Iselin Stakes on June 30, 2018 when Thomas Shelby bested a talented field in a front-running performance over a mile and a sixteenth.

Jacobsen is back training for the first time since 2018.