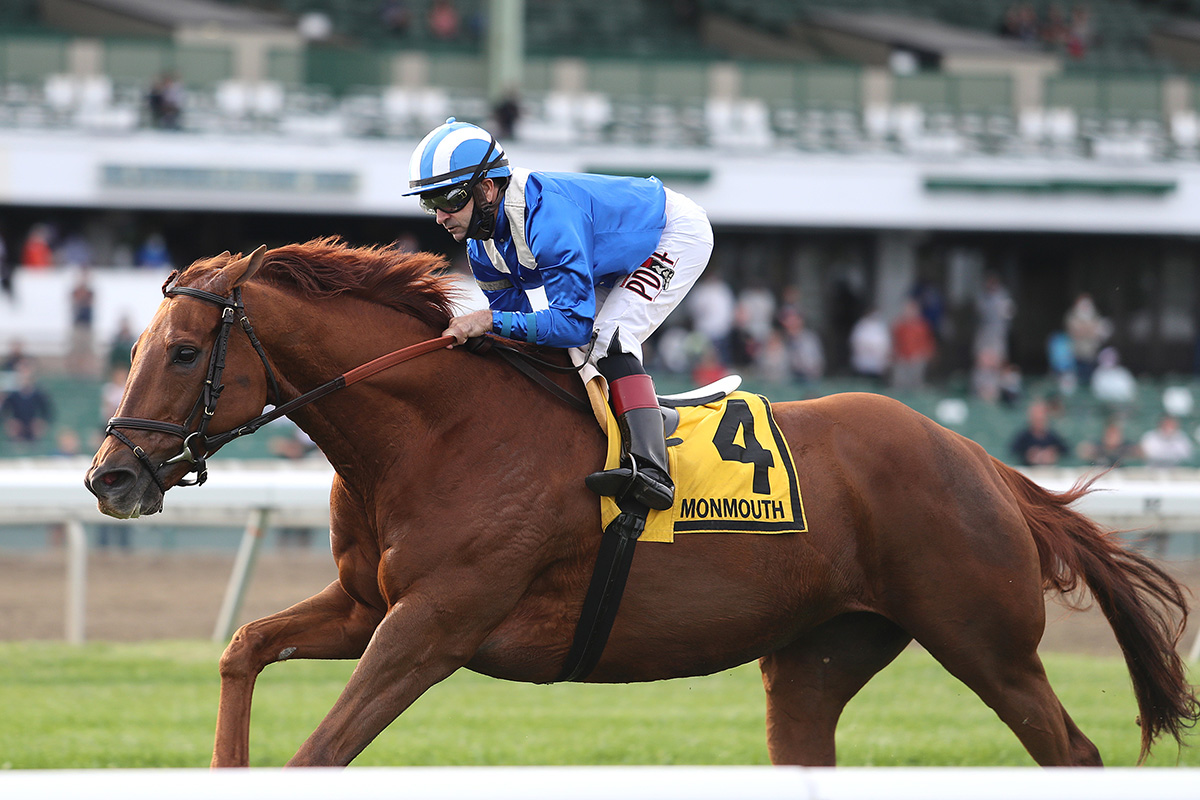 Despite being idle for more than 16 months Almanaar reinforced two well-known beliefs in Saturday’s Grade 3 Monmouth Stakes at Monmouth Park. One is that age is just a number. The other is that trainer Chad Brown has the rare ability to have a turf horse ready no matter how long it has been between races.

Almanaar made his 8-year-old debut a winning one in capturing the Monmouth Stakes for the second straight year, rallying stoutly from next-to-last after three quarters of a mile to give Brown a 1-2 finish in the $150,000 feature race on the 11-race card.

The gelded son of Dubawi, who rolled home one length ahead of stablemate Serve the King in the nine-furlong turf stakes, had last raced on May 25, 2019 at Monmouth Park when he won the Monmouth Stakes, then a Grade 2. Prior to that race, his only start in 2019, he had been idle for four months.

None of that mattered as the 3-2 favorite in the field of nine 3-year-olds and up used his strong late kick to overpower the field.

Serve the King finished 2¼ lengths ahead of Bal Harbour.

“He has been training well at Belmont the whole time,” said Luis Cabrera, who oversees Brown’s string at Monmouth Park. “The guys there really like the way he has been training. So he has been doing well. These type of horses know what to do. They know where the wire is. So you don’t worry about the layoff with those types. And he has a lot of class. We know that.

“He ran great. I’m very happy with his performance. I can’t say I’m surprised because this horse has been training consistently. He has not missed a work. He was fit and he was ready. Chad always makes sure the horses are 100 percent ready to run.”

Owned by Shadwell Stable, Almanaar won for the eighth time in 21 career starts, a record that includes a victory on the Grade 1 Gulfstream Park Turf Handicap in 2017.

Though far back in the field early, jockey Joe Bravo said he knew exactly what he was sitting on and tried to be patient through fractions of :48.82 to the half, 1:12.93 to three quarters and 1:37.31 for the opening mile.

The final time for the nine furlongs over a firm turf course was 1:49.22

It was just two weeks ago that Brown trainees finished 1-2 in the $100,000 Violet Stakes on the grass at Monmouth Park, with She’s Got You winning off a 12-week layoff.

“Only Chad Brown does this. He’s amazing,” said Bravo. “This is the second time this year that he has done this in a stakes race at Monmouth Park by winning off a long layoff. (This is) an old horse but he’s a trouper. He’s so strong and powerful that I just wanted to give him some daylight turning for home. Class prevailed.”

After the opening half mile, and even after three quarters had been run, Almanaar had just one horse beat until he made his explosive move coming out of the turn, overhauling Bal Harbour while having more than enough in reserve to hold off Serve the King.

Racing resumes at Monmouth Park with a special eight-race holiday card on Monday, Oct. 12, with the $100,000 Born to Run Stakes for 2-year-olds serving as the feature. First race post is 12:50 p.m.