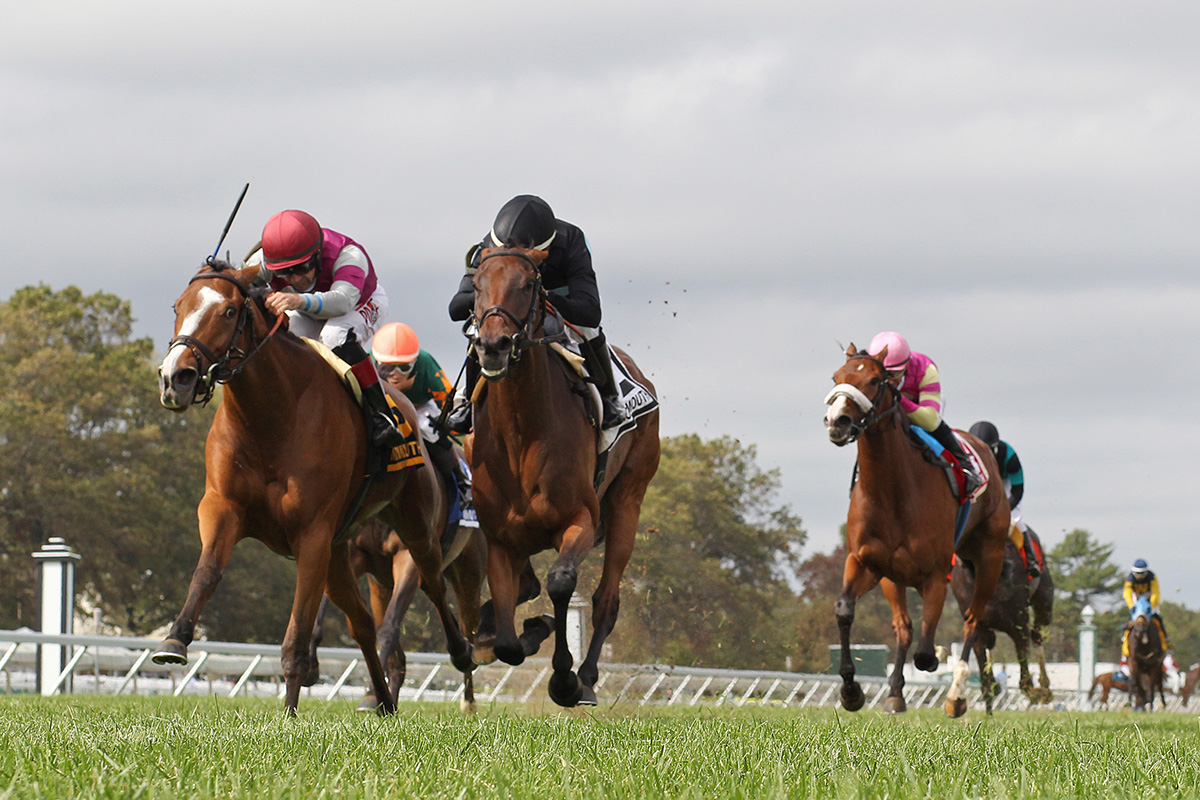 As if any additional reminders were needed as to why Chad Brown has been America’s leading turf trainer the past eight years he offered up two more on Saturday at Monmouth Park.

She’s Got You, rallying on the outside, surged past stablemate Altea in deep stretch to give Brown a 1-2 finish in the featured $100,000 Violet Stakes at a mile and a sixteenth on the turf. The winning time was 1:42.50.

Despite being idle for nearly 12 weeks, She’s Got You flashed an impressive closing kick, rallying from last at the half in the seven-horse field to get up by a neck over Altea, who had to split horses in the final sixteenth of a mile.

“Both horses raced very well,” said Luis Cabrera, who oversees Brown’s string at Monmouth Park. “Either one could have won it. We’re very pleased with how they ran. I wasn’t concerned about the layoff. They told me she has been training very well at Saratoga. When horses have back class you don’t really worry about a layoff. You just make sure they’re ready and they run.”

Jockey Joe Bravo said he was content to sit patiently knowing what he had underneath him.

“I really wasn’t worried about the layoff,” said Bravo. “I would say I was really confident with her until I got on her and I guess because of the layoff she was very intense and fresh. So my hardest job was to get her to turn off and relax.

“I know the proper turf race is to sit in the pocket and go but they were so bundled up ahead of me and going so slow I just wanted to get her running early into the turn. Chad Brown’s training took over from there.”

Valedictorian, pressed by Story Time, set early fractions of :23.47, :48,22 and then 1:11.81 for six furlongs before starting to give way. Bravo had She’s Got You rolling on the outside, with Altea forced to split Story Time and Valedictorian to find late running room.

Lucky Stride was two lengths back in third.

Owned by John D. Gunther and Tanya Gunther, She’s Got You posted her fourth victory in nine career starts. The only time she has failed to hit the board was in her racing debut in 2018.

“It’s nice to win one for John Gunther,” said Bravo. “I rode Last Gunfighter (a multiple graded stakes winner who earned more than $1.2 million) for him so it brought back some good memories.”

Bravo and Brown are the percentage leaders among jockeys and trainers (with more than 15 starters) at the meet, which ends its 36-day run on Sunday.

Following Sunday’s closing day for Monmouth Park’s 75th season, the Thoroughbred racing schedule in the state will continue with the nine-day Meadowlands-at-Monmouth Park meet that gets underway Saturday, Oct. 3 (Preakness Day). The stakes program will be worth $900,000, with a stakes race during each of the nine cards throughout October. That meet runs through Saturday, Oct. 24.