Breen Eager To Find Out About Drop Dead Red In $60,000 Politely Stakes Saturday 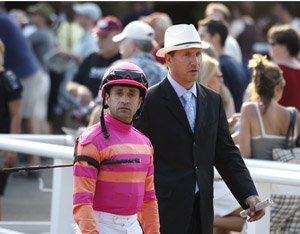 Trainer Kelly Breen isn’t quite sure what to expect from Drop Dead Red when he sends out the 5-year-old mare at Monmouth Park on Saturday, May 19, in the featured $60,000 Politely Stakes. But he is curious to find out if the newest addition to his barn is as good as her morning behavior indicates.

So rain or shine, and whether or not the one mile event is taken off the turf or stays on, he intends to find out.

“Maybe it’s a reach, but she is doing everything in the right way in the morning. She has been training very well,” said Breen. “That’s why we’re taking a shot in a stakes race with her right away.”

Claimed at Keeneland for $25,000 on April 8 by Cavallino Racing LLC, Drop Dead Red will be making her first start under Breen’s care. The Politely Stakes has drawn a field of 13, including main track only entrant Sine Wave, but a forecast for continued rain throughout the weekend could force the Saturday feature onto the main track. That would no doubt result in some race day scratches, but Breen said his charge won’t be one of them.

“I saw this as an opportunity at our home track, and with the chance of the race coming off the turf we thought we’d give it a try.”

Breen, meanwhile, is off to an impressive start at the Monmouth Park meet with four winners and two seconds from eight starters. He won two races at Monmouth Park (and one at Parx) on May 13 – his 49th birthday.

“Three winners out of four starters is a good day whether it’s your birthday or not,” he said.

The New Jersey Racing Commission has unanimously approved the uncoupling of same owner interests in all races on an experimental basis for the 2018 racing season, effectively immediately. As a result, all horses – even if they have common ownership – will now race as separate betting interests.

“It’s a tremendous win for Monmouth Park and for the betting public,” said racing secretary John F. Heims. “Fans want bigger fields and this is a significant step in that direction. It gives the public what they’re looking for.”

Live racing resumes at Monmouth Park with an 11-race card on Saturday, May 19. Gates will open at 10 a.m. that day to accommodate a Preakness Stakes program that starts at 10:30 a.m.

Joe Bravo is about to add some hardware to his impressive collection of honors and trophies.

Bravo, who has won a record 13 Monmouth Park riding titles, was named the winner of the 2018 Mike Venezia Memorial Award and will be honored during a May 28 ceremony at Belmont Park following the third race.

“On behalf of everyone at Monmouth Park, we congratulate ‘Jersey Joe’ Bravo on this most deserved award,” said Bill Anderson, general manager of the racetrack.  “I’m proud to call him a friend and glad that the industry has recognized his altruistic spirit toward his fellow riders and the racing community.”

The Venezia Award, established by NYRA in 1989, is presented annually to a jockey who exemplifies extraordinary sportsmanship and citizenship. It is named in honor of jockey Mike Venezia, who died as a result of injuries suffered in a spill at Belmont Park in 1988.

Bravo has won more than 5,200 races with career earnings in excess of $170 million.

Ferrer was presented with the award during a ceremony on April 15 at Santa Anita Park.