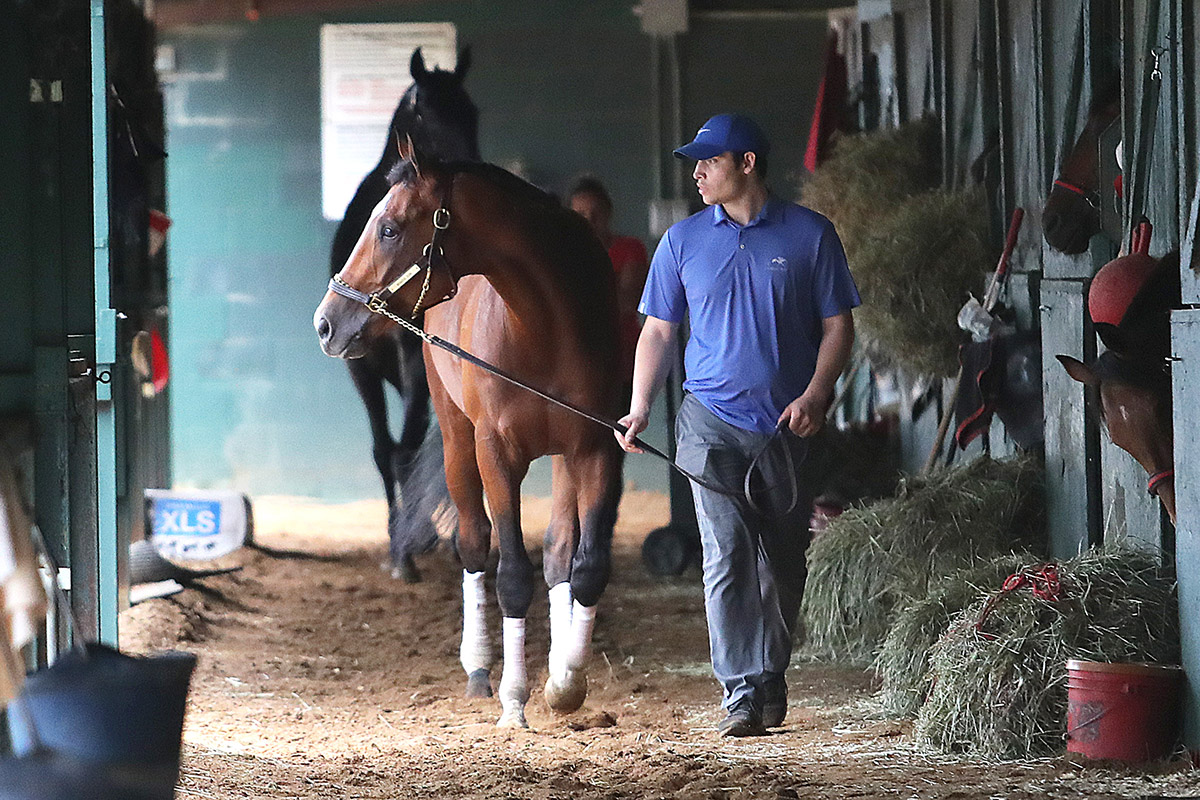 Blake Cox didn’t sugarcoat his assessment of Juju’s Map’s disappointing effort in the Mother Goose in her last start – but he is hoping he has an answer for the lackluster showing.

Cox, the son of Eclipse Award winning trainer Brad Cox, and his dad’s top assistant, is hoping a return to two-turn racing in Sunday’s Grade 3 Monmouth Oaks at Monmouth Park will get the talented filly back on track.

Juju’s Map had never been worse than second in her first five career starts – including a runner-up finish the Breeders’ Cup Juvenile to Echo Zulu – before her third-place finish as the 1-2 favorite in the Grade 2 Mother Goose on June 25 at Belmont Park. She was beaten 7¾ lengths in the four-horse field in the mile and a sixteenth one-turn race.

“I would say we were disappointed,” said the younger Cox. “She trained very well going into the Mother Goose. We really had high hopes for her – in that race and for her 3-year-old campaign.

“Obviously, when she raced below expectations we had to re-route. So we’re at Monmouth Park and we’re back to two turns. I think that might have been the excuse. She’s not a one-turn horse.”

Juju’s Map, a daughter of Liam’s Map-Nagambie by Flatter, heads a talented six-horse field of 3-year-old fillies for the 98th edition of the the mile and a sixteenth Monmouth Oaks. The Sunday features carries a purse of $250,000.

“I think she will answer a couple of questions for us on Sunday as to how good she really is,” Cox said.

Owned by Albaugh Family Stables LLC, Juju’s Map shows a 3-2-1 record from six career starts with earnings of $728,180. Her crowning achievement to this point is a win in the Grade 1 Alcibiades Stakes at Keeneland Oct. 8.

“She has always been a filly that trains well and one we had high hopes for,” said Cox. “For her to run like she did in the Mother Goose was disappointing.”

The Monmouth Oaks will mark Juju Map’s third race this year. She won her return at 3 by 4¾ lengths on May 6 at Churchill Downs off a seven-month layoff.

“He first race back against older horses was a huge race off the layoff,” said Cox. “She was training as well as she ever has going into the Mother Goose. That’s why we were so disappointed. We expected a big effort and didn’t get it.

“We’ll see if two turns is the answer.”

The rest of the field for the Monmouth Oaks, which goes as the fifth race, is Silverleaf, Shotgun Hottie, Runaway Wife, Shahama and Office Etiquette.