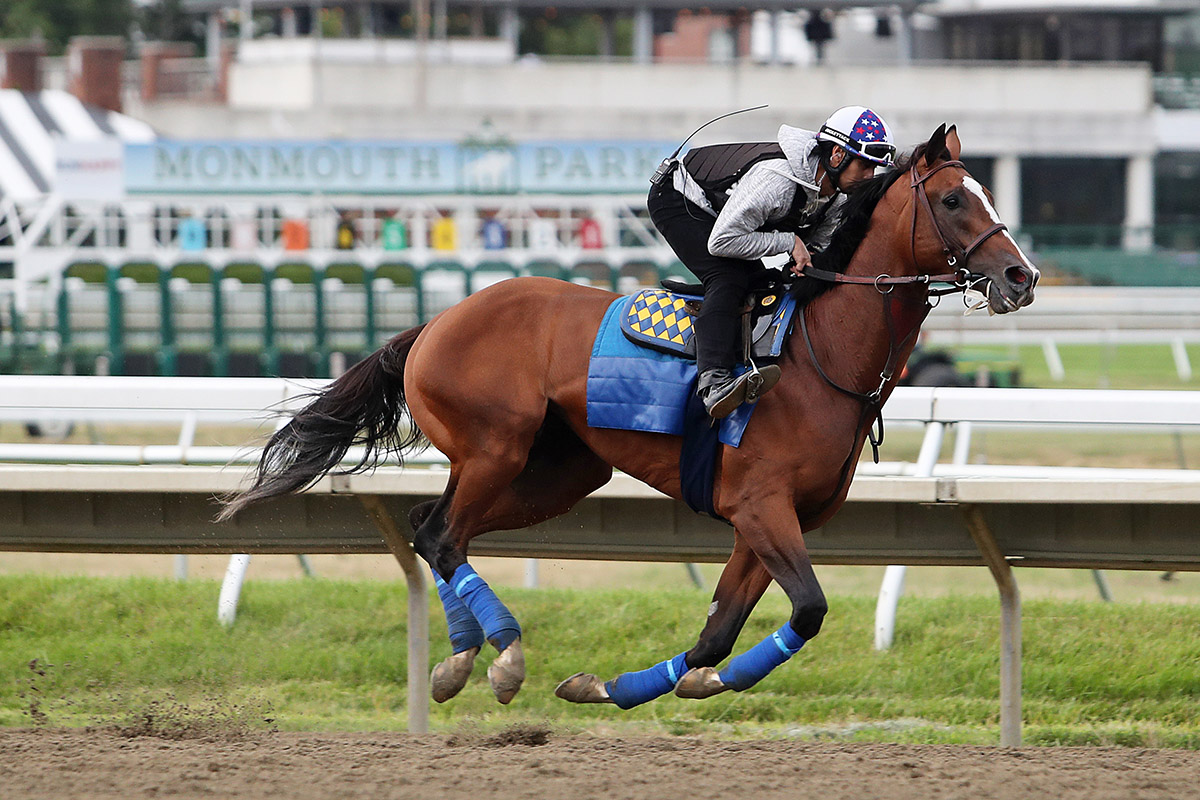 That’s the word from Jimmy Barnes, the top assistant to Hall of Fame trainer Bob Baffert, who has already collected a record eight Haskell trophies.

“The horse is doing very well,” said Barnes, who arrived on the Monmouth Park backside with Authentic on Tuesday evening following a flight from their Southern California base. “He has really taken to the track well, which is how it’s been with all the horses we’ve brought here in the past. They all seem to handle it well, and that’s probably one of the reasons we keep heading back in this direction. But all horses are different in their unique way.”

First race post time is noon. The Haskell is the 12th race on the program with a scheduled post time of 5:48 p.m., with NBC televising from Monmouth Park from 5 to 6 p.m. as part of the “Breeders’ Cup Challenge Series Win and You’re In – presented by America’s Best Racing.”

Authentic, a son of Into Mischief, was undefeated in his first three races, including the Grade 3 Sham Stakes and the Grade 2 San Felipe Stakes before he was the runner-up in the Grade 1 Santa Anita Derby last out. Now he is looking to enhance his status on the Kentucky Derby leaderboard.

In this reshuffled and reconfigured Triple Crown campaign due to the COVID-19 pandemic, the Haskell, for the first time, is offering qualifying points (100-40-20-10) for the re-scheduled Kentucky Derby (now on Sept. 5) to the first four finishers.

In addition, the Haskell offers a “Win and You’re In” bonus for the Breeders’ Cup Classic on Nov. 7.

Authentic currently sits in third place with 100 points on the Kentucky Derby qualifying board, virtually assuring him his spot in the starting gate for that leg of the Triple Crown. He drew post 2 for the Haskell, with Mike Smith flying in from the West Coast to ride.

Baffert said the race strategy will be left up to Smith, one of the sport’s best big-race riders.

“I haven’t really even looked at these horses or what the field is. Going into these races I really don’t look at that closely. Mike Smith is the master,” said Baffert. “He does his homework and he figures it out. We’ll briefly talk about it. My job is to make sure he has plenty of horse underneath him.

“The horse is doing great. But like all of my horses, they have to get away from the gate cleanly. If he does, he’s a horse who has speed. He can go fast, or from the two (hole), I think he can sit off of it a little bit. They key is the break. Once Mike gets away from there Mike can figure it out.”

Authentic, purchased at auction for $350,000 as a yearling, is owned by B. Wayne Hughes’ Spendthrift Farm and Starlight Racing. Recently, Myracehorse.com, which is syndicate selling micro shares, came into the partnership. The deal has generated more star power around Authentic.

“What’s making this a little more fun, and probably adding a little more pressure on me, is that Myrachorse.com bought into this horse and they’re selling little shares, so all my friends and family have bought shares,” said Baffert. “Walker Beuhler (the pitcher) from the (Los Angeles) Dodgers and (Olympic and World Champion gold medalist skier) Bode Miller are in. They’re all texting me, wanting to know how their Derby horse is doing. I think he’s a top five Derby prospect.”

While Baffert, a two-time Triple Crown winning trainer, has eight Haskell victories and Grade 1 wins in the triple digits on his resume, Saffie Joseph, Jr. is looking for his first Haskell win and second Grade 1 triumph.

“Saturday is most definitely a big day for us,” said Joseph, who sends out the New York-bred Ny Traffic in the Haskell and also runs Grade 1 winner Math Wizard in the Monmouth Cup and Queen Nekia in the Molly Pitcher Stakes on the undercard.

Ny Traffic arrived at Monmouth on Tuesday and Joseph said the son of Cross Traffic has been has been training well over the racing strip as he prepares to reunite with Paco Lopez, Monmouth’s defending leading rider and a six-time champion here, for this race with so much at stake.

Ny Traffic has earned 70 Derby points and is in eighth place on the qualifying ladder. He drew the outside Haskell seven post and is the third betting choice at 7-2.

“Paco thinks the draw is ideal. I love the draw, too. All the speed is inside and he’s tactical enough that he can break and see what goes on, and then Paco can make decisions as far as where he needs to be. We’ll leave it to him. You always want to break good, and that’s key, especially on the dirt,” said Joseph, who on Friday thought he would be at Monmouth Saturday instead of at Saratoga to saddle Tonalist’s Shape in the Grade 1 Coaching Club American Oaks.

Ny Traffic, second in the Grade 3 Matt Winn Stakes in his last start, has yet to win a graded stakes race. But he has been knocking on the door and now his trainer thinks he may kick it down.

“On the numbers he just kept getting faster and faster,” Joseph said. “He’s made progressive jumps and that’s what you want to see from a 3-year-old because it means he’s headed in the right direction.

“I don’t think he was the best horse in the crop, but the way things have worked out, he’s just climbing higher and higher. That’s our hope. That he’ll run another bang-up race (in the Haskell) and then hope for the Kentucky Derby that he can get there. You never know. He could be the best on the day.

“I could see our horse show up and continue to improve himself. As I said, in my opinion he was never the best in the crop, but he just keeps improving and getting better and better and better. That’s all we can ask for.”

Trainer Todd Pletcher reported from Saratoga Friday that it’s all systems go for Dr Post, who has been working forwardly on the Saratoga training track for the Haskell and will ship in to Monmouth Park on Saturday morning.

Dr Post, the 5-2 early second choice, will break from the inside post under 13-time Monmouth Park riding champion Joe Bravo, who tries for his second Haskell triumph (winning with Lion Heart in 2004). Pletcher is seeking his fourth Haskell win and first since 2013 (Verrazano).

Dr Post is owned by Teresa and Vinnie Viola’s St. Elias Stable and is named for the man who is their longtime family physician and close friend. The colt by Quality Road heads into the Haskell with 60 Kentucky Derby points, good for ninth place.