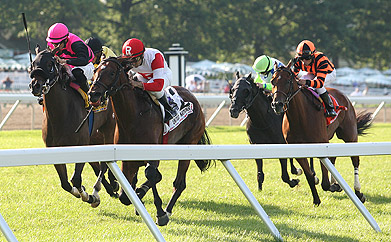 Bertranda returns to the turf for just her second start over the surface when she breaks from the outside in a field of nine 3-year-old fillies in Saturday’s $75,000 Boiling Springs Stakes going a mile and a sixteenth at Monmouth Park.

The daughter of Boys at Tosconova out of the Cape Canaveral mare Princess Maura made her turf debut last time out in the Christina Stakes at Delaware Park on June 14 where she finished strong in the stretch to get third behind graded stakes winner Journey Home. It was also her first start going around two turns.

“We decided to give her a shot on the grass last time out because of her pedigree,” said trainer James Noble. “Her mother won all of her races on the grass and she showed that she liked it with her run. She had a maintenance work the other day and has been going good coming out of the race.”

Prior to the move to the grass, Betranda was a sprinter on the dirt where she broke her maiden in her fourth career start and won an allowance optional claiming event three starts back, both at Parx. Silvestre Gonzalez was aboard for the maiden score and will get the mount Saturday for the Boiling Springs.

Owned by Stanley J. Trzcinski, Bertranda has breezed once since her run in the Christina. That work came on July 12 when she went four furlongs in :49 4/5 over the fast main track at Parx.

To notch her first career stakes victory, Bertranda will have to get by multiple starters who are coming off victories including Watch Your Six, who made her first start on the turf a winning one against allowance company for Michael Stidham, and Contributing, who is stretching out after taking a five furlong allowance event gate-to-wire on the turf at Delaware Park.