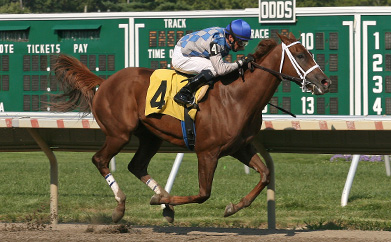 Berned overcame a slow start with an impressive middle move and even stronger stretch run to capture the $60,000 Serena’s Song Stakes at Monmouth Park on Saturday, May 12, giving jockey Joe Bravo his third winner on the 12-race card.

Berned, coming out of consecutive graded stakes, showed off her class and off-track breeding to win for the fourth time in 13 career starts. The 4-year-old daughter of Bernardini is now a perfect 2-for-2 over the Monmouth Park oval after stepping the mile and 70 yards in 1:42 flat on Saturday.

“This race makes you expect a really good summer out of her,” said Bravo, who has won a record 13 Monmouth Park riding titles.

As is her custom, Berned broke last and was still sixth after an opening half in :47.28, with Viva Vegas cutting out the early fractions while being pushed along by Miss Inclusive. Bravo asked his charge to pick it up midway through the final turn and Berned responded with a quick, decisive move. That left her perfectly positioned at the top of the stretch, where Berned got the jump on Teresa Z and then left the field in her sloppy wake.

On a day when Bravo dominated the jockey ranks with his three winners, 12 different trainers won the 12 races.