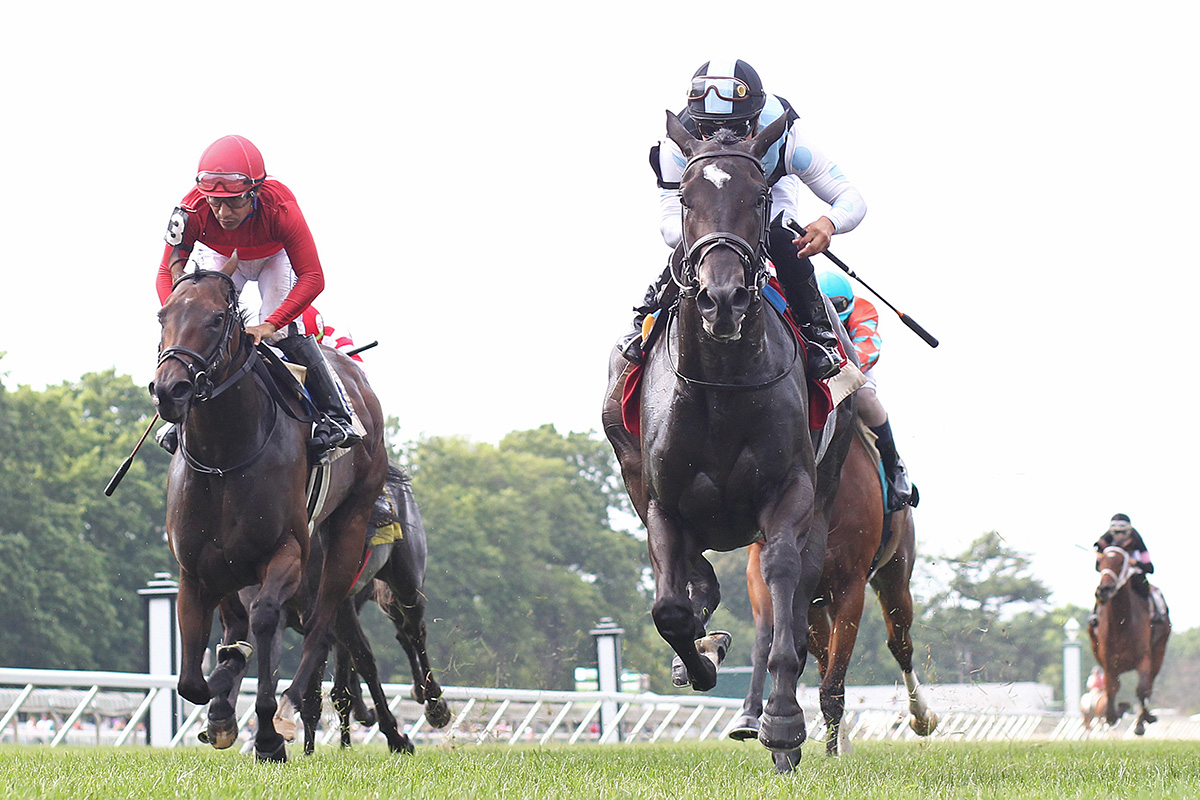 If Benbang had retired without any black type to her credit, trainer Jonathan Thomas said he “would have been very disappointed in myself as a trainer because she deserves it off what we’ve seen ability-wise.”

No need to worry about that any longer.

BenBang was hustled to the front after the break, rebuffed pressure to the half and stayed strong through the stretch on the way to a one-length victory in Saturday’s $100,000 Blue Sparkler Stakes for 3-year-old fillies at Monmouth Park.

Sent off as the 8-5 favorite in the field of seven, Benbang notched her first career stakes win in her third try – and sixth career start.

“I’m excited for her to be a stakes winner,” said Thomas, now 4-for-8 at the Monmouth Park meet. “She has a lot of blue sky ahead of her as a horse.”

Ridden by Albin Jimenez, Benbang didn’t clear the field immediately from post position one, with Jimenez pushing her to the lead. She shook off early pressure first from Lady Zeta and then from Mac the Pee H Dee, going the opening quarter in :22.49 and reaching the half in :44.89.

“(Jonathan Thomas) told me the filly was doing fantastic and if I could get her to the lead and get her to relax that would be great,” said Jimenez. “I did my job and she did the rest. They pressured her a little but I always felt I had a ton of horse. She’s a big filly and even though she has speed I had to hustle her a little bit to get the lead at the break. I had it in my head to get the lead and she responded for me.”

The victory was the third in six career starts for the Kentucky-bred daughter of Shanghai Bobby-Indian Street by Street Sense. Her only previous grass try was a fourth-place finish, beaten just three-quarters of a length, in the Stewart Manor Stakes at Belmont Park last November.

“She’s a very naturally fast filly who typically breaks very well,” said Thomas. “We don’t ever want to take that away from her. So we thought we would be forward and if they wanted to go with us that was fine, but they would have to work for it early. I think they actually all broke well and she just had to work to get detached a little bit.

“She has been a little unfortunate in the sense that we have targeted some grass races for her and they’ve come off. She got really unlucky in her only start on the grass prior to this at Belmont. I was a little disappointed in the ride that day so we didn’t get to learn as much as we’d have like to about her on the grass. But she is super dead on and she has hardly done anything wrong.”