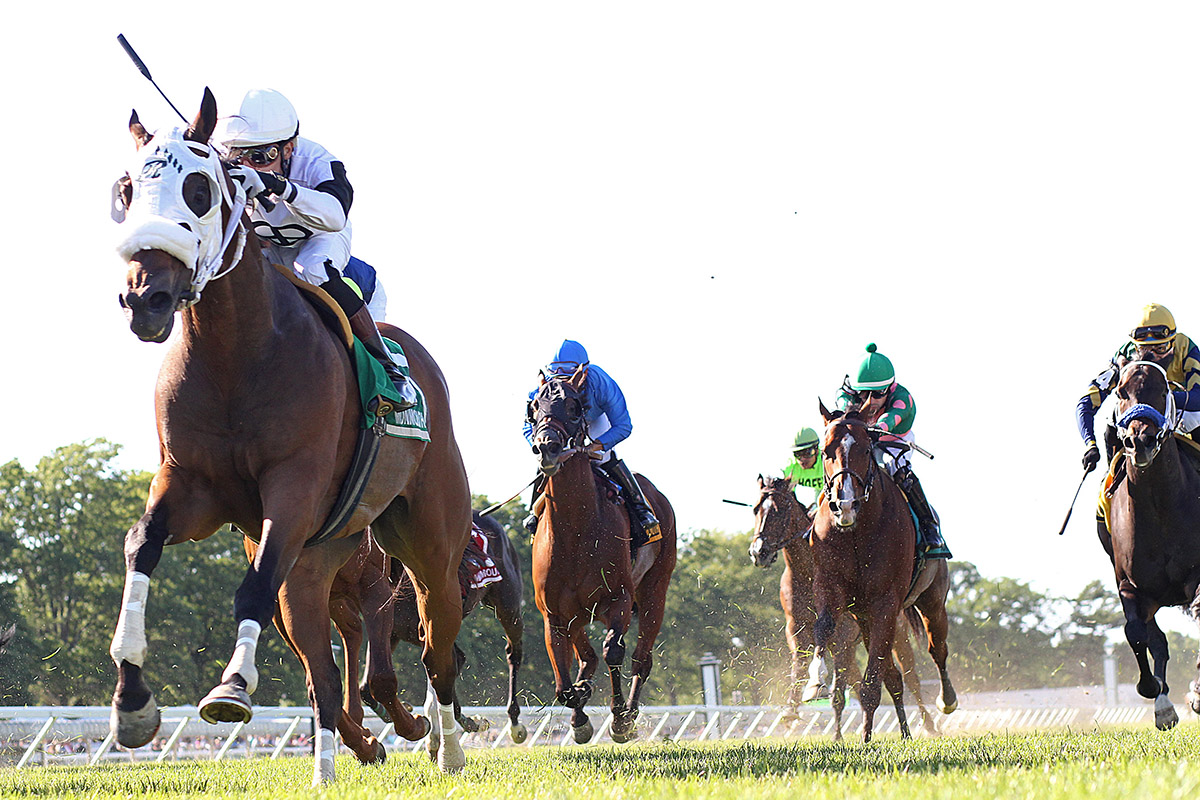 Trainer Frank Russo finally found the extra half furlong he has been looking for with Belgrano, and the 8-year-old gelding took full advantage of it.

Able to sit a stalking mid-pack trip behind dueling speedsters The Critical Way and Carotari, Belgrano found a seam in mid-stretch and then was able to hold off the fast-charging Proven Strategies to score a neck victory in Sunday’s $100,000 Select Stakes at Monmouth Park. The Father’s Day crowd of 20,687 was a season-high for the Jersey Shore track.

After being winless in five starts this year, the last four at five furlongs on the turf, Russo was confident coming into the 5½-furlong turf feature because of that added distance.

Belgrano finished 4¼ lengths behind The Critical Way when the latter won the Get Serious Stakes at Monmouth Park on May 22, but turned the tables on the 2-1 second choice in the field of 11.

“The extra half furlong made all the difference,” said Russo. “We’ve been waiting for a 5½-furlong grass race after his last four races were at five furlongs. He’s a closing sprinter. He needs that little extra distance to do what he does. At five furlongs if there’s any disorder in the race it’s hard to get up if you’re a closer like he is.”

Proven Strategies closed for second, 1¼ lengths ahead of High Limit Room, as The Critical Way and Carotari finished off the board.

“He loves 5½ furlongs,” said Vargas, who celebrated his first Father’s Day with his 19-day-old daughter, Camilla, in the winner’s circle. “Coming out of the chute you can feel he is not forcing things and is able to get into a good stride and get comfortable. He can be fast, but going five furlongs the turn is right there and it seems to hurt him just a little bit. But going 5½ he has time to get into a nice rhythm.

“I knew there was a lot of speed in here. I was where I wanted to be. I hustled him a little bit to keep in contact with the speed. Once I got there I was happy with my position. I know the two horses that were on the front dueling will give a little bit in the stretch, especially with that extra half furlong. I wasn’t panicking. I found my room in the stretch and went through it. I had plenty of horse.”

A gelded son of War Front owned by Peace Sign Stables, Belgrano has now won a stakes race at Monmouth Park for the three straight years. It was his ninth victory in 41 career starts and he improved to 5-for-13 at 5½ furlongs on the grass.