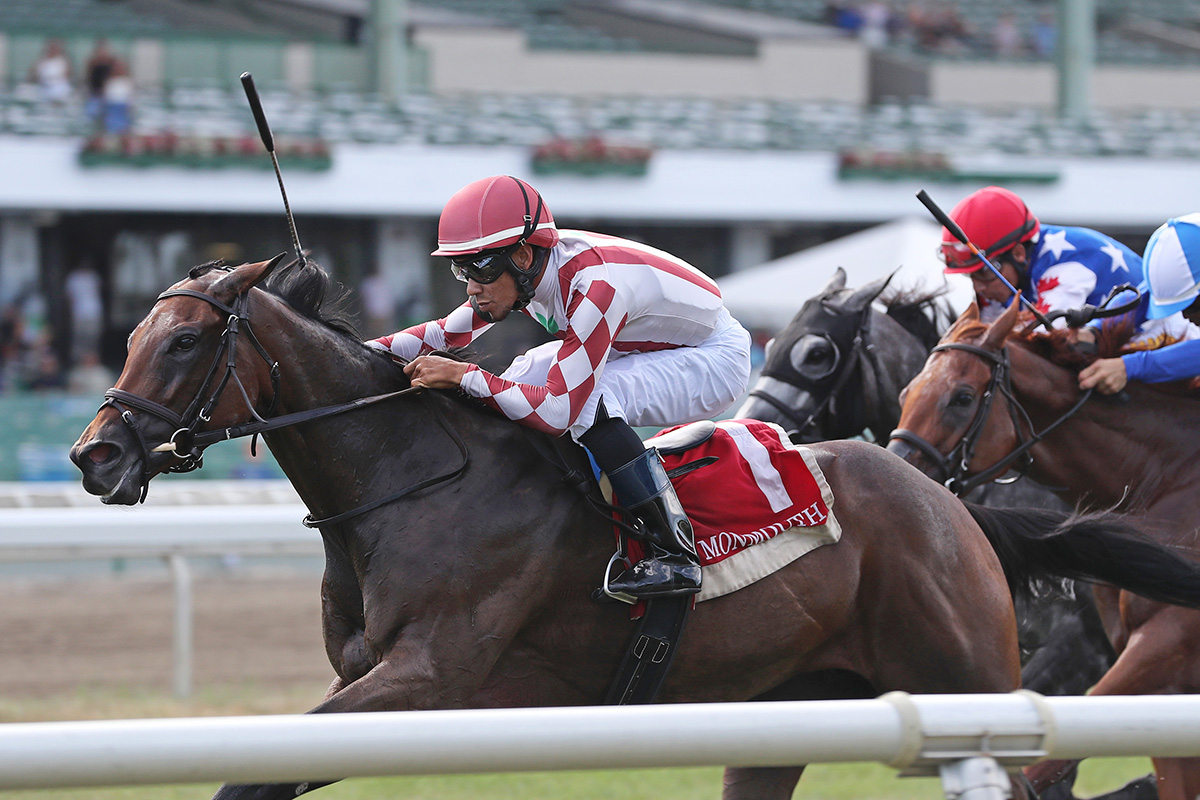 With all of the positives signs that Bay Storm has been giving in the mornings since arriving at Monmouth Park at the start of the meet, trainer Jonathan Thomas figured he had only one option with his 4-year-old filly.

“She has really thrived this summer at Monmouth Park. She has really taken to Monmouth and has done well,” said Thomas. “She was doing so well I couldn’t think of anything else to do but let her run,” he said.

The daughter of Kantharos showed the good vibes she was giving off were a hint of things to come, slipping up the rail under jockey Jaime Rodriguez on the way to a one-length victory in Sunday’s $100,000 Incredible Revenge Stakes at Monmouth Park.

The 13-10 favorite in the field of seven fillies and mares, 3 and up, was able to use post position one to secure an inside trip off dueling early leaders A G Indy and Red Ghost before Rodriguez found an opening on the rail coming out of the final turn. Bay Storm quickly dashed to the lead and was never headed.

“Jonathan told me if I could get the lead comfortably to go for it but if they were going out there like crazy then stay off the pace until you are ready to move,” said Rodriguez, a regular on the Delaware Park and Maryland circuits. “The horse outside of me (A G Indy) was going a little fast and I didn’t want to go with her. I had the rail so I stayed where I was knowing something would open for me. When the rail opened out of the turn she went right through it. She wanted to run.

“I had a decision coming out of the turn. Do I go outside or stay inside and wait and be patient? I decided to wait because most of the time when you do that the rail opens for you. That’s what happened. I had a lot of horse once that hole opened.”

Owned by Bridlewood Farm, Bay Storm improved to 4-3-1 from nine career starts, all on the grass, in recording her second career stakes win.

Rodriguez had Bay Storm comfortable and stalking through fractions of :21.92 and :44.93 to the half. Red Ghost held second, a nose ahead of 8-5 second choice Honey Pants.

It marked the third stakes win of the meet from just 14 starters for Thomas. He previously won the Jersey Derby and the Blue Sparkler Stakes.

“I thought Jaime Rodriguez rode a really clever race, because even though she saved a lot of ground I don’t think she had the easiest trip,” said Thomas, who has six wins and four seconds from his 14 starters at the meet. “I thought he did a nice job. He was very patient. He let her get her feet under her and let her show a turn of foot, which I love. It was a very good ride. Obviously she is doing super but you have to have a pilot who can get them there.”