Baffet Optimistic As He Prepares To Ship Taiba East For July 23 TVG.com Haskell Seeking a Record 10th Win In The Grade 1 Race 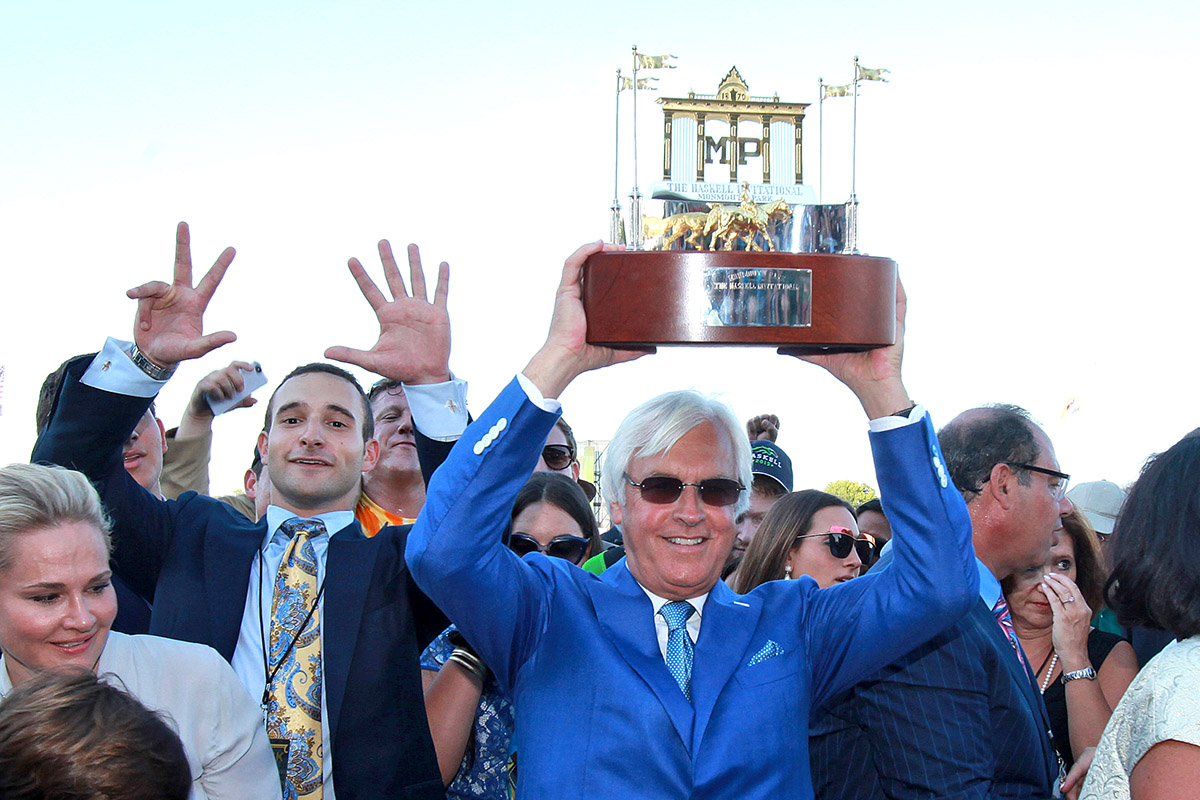 Santa Anita Derby winner Taiba, who was recently reunited with trainer Bob Baffert, is headed to Monmouth Park for the $1 million TVG.com Haskell Stakes as the Hall of Fame conditioner looks to extend his record with a 10th victory in the Grade 1 event for 3-year-olds.

The Haskell, which will be contested for the 55th time on Saturday, July 23, is a “Win and You’re In” race in the Breeders’ Cup Challenge Series with the victor guaranteed a spot in the starting gate for the Longines Breeders’ Cup Classic on Nov. 5 at Keeneland.

“I hadn’t seen him in a long time. I’m happy with the way he looks,” said Baffert, who earlier this month welcomed Taiba back into his barn after he served a 90-day suspension for a medication violation involving Medina Spirit, who crossed the wire first in the 2021 Kentucky Derby and was later disqualified.

“I worked Taiba today and he worked really well. He came out of it well. He’s happy. I’m happy with him.”

Taiba (pronounced Tay-buh) covered five furlongs handily in 59.40 at Santa Anita and it was the second fastest time of 55 horses working that distance Friday morning.

One week earlier Taiba worked from the gate and covered six furlongs in 1:12-flat.

Taiba was a $1.7 million purchase by Zedan Racing Stables out of a 2-Year-Olds-in-Training Sale in March 2021 and he is a son of 2017 Horse of the Year Gun Runner out of the Ohio-bred Needmore Flattery. She was a racing legend in the Buckeye State, a winner of 17 stakes races while competing against males as well as females, and a two-time Ohio Horse of the Year.

The chestnut colt, who bears a striking resemblance to both his sire and dam, was an impressive winner of the Grade 1 Santa Anita Derby in only his second career start and has been idle since a 12th place finish in the Kentucky Derby on May 7, when former Baffert assistant Tim Yatkeen was handling the training duties.

“He’s a special horse. He was asked to do a tall task in the Derby. The Derby was crazy. It was a stampede,” Baffert said. “He showed what he could do in the Santa Anita Derby off just one race (a maiden special weight race in March that he won by 7½ lengths).

“This is the time of year when the 3-year-olds start to shine. I think he’s up for the Haskell and he’s coming to the Haskell.”

While Monmouth Park will be new to the owner, Baffert is very well acquainted with the racetrack.

“The Haskell is a very important race. I remember going there the first time and seeing the names of those horses who had won it before. It’s always been an important race,” said Baffert. “As a matter of fact, when you’re thinking of your Kentucky Derby horse you’re always thinking, ‘Okay, I need a Derby horse and who’s going to be my Haskell horse?’

“That’s why we’ve been lucky in this race. I always send the best ones. You’re getting the best one (again this year).”

Hall of Fame jockey Mike Smith, who was in the irons for the Santa Anita Derby and the Kentucky Derby, gets the return call on Taiba. Smith is seeking his fourth Haskell win after finding the winner’s circle with Authentic (2020), Coronado’s Quest (1998) and Hall of Famer Holy Bull (1994).

As of Friday afternoon, in addition to Taiba, probable entrants in the Haskell are Grade 1 winners Cyberknife, Jack Christopher, and White Abarrio for trainers Brad Cox, Chad Brown, and Saffie Joseph, Jr., respectively, the Dale Romans-trainee Howling Time, and Benevengo, a recent winner in allowance company last out for the locally-based trainer Jesse Cruz.

The field for the Haskell will be drawn on Wednesday.

Editor’s note: This story was written by Lynne Sniersen of the Monmouth Park publicity staff.