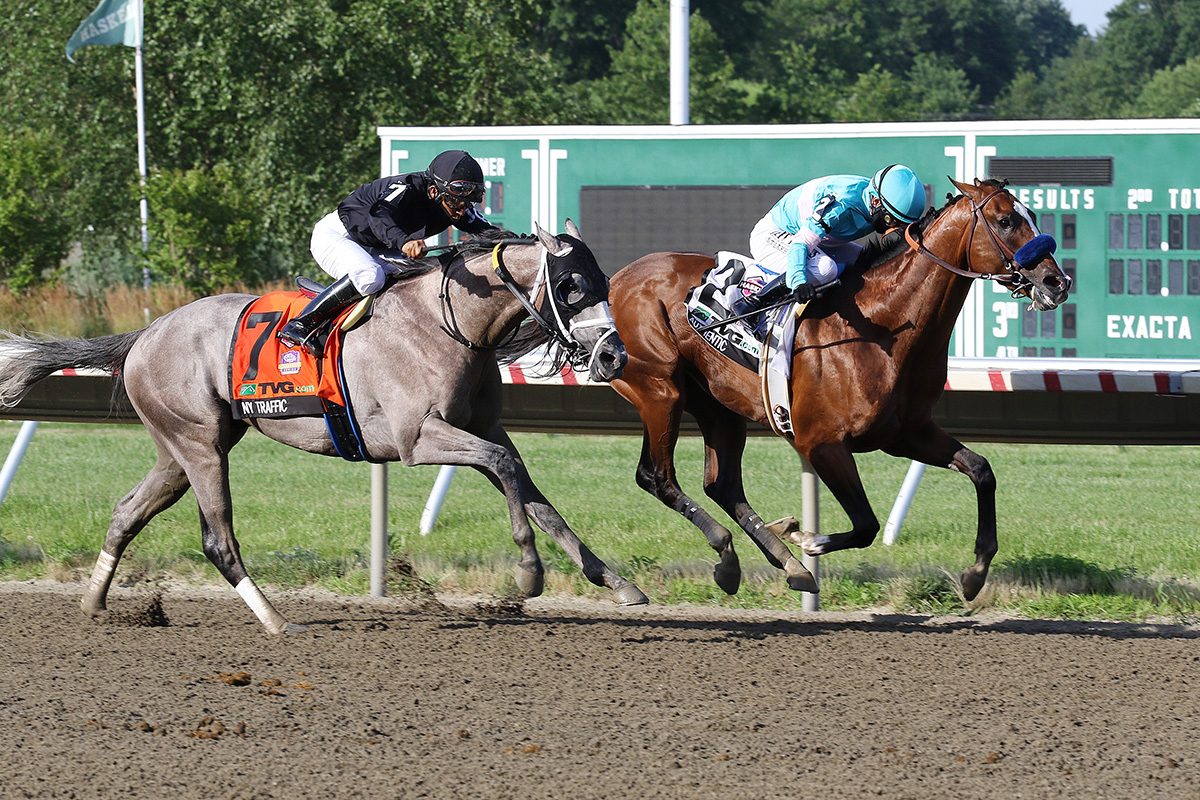 On a day that saw Monmouth Park set a handle record for a non-Breeders’ Cup card, heavily-favored Authentic extended Hall of Fame trainer Bob Baffert’s record for victories in the Grade 1 TVG.com Haskell Stakes to nine by digging in gamely on Saturday to hold off a fast-closing Ny Traffic by a nose.

Despite limitations to on-track attendance because of protocols put in place to stem the COVID-19 pandemic, a total of $20,479,392 was wagered from all sources on the 14-race card.

“The reality is that this will go down in history as one of the most challenging yet gratifying Haskell Days in history,” said John Heims, Monmouth Park’s racing secretary and director of racing. “We are grateful to the Governor for his leadership and for permitting us the ability to have race fans to enjoy this terrific experience and be part of a day that will long be remembered.”

Racing outside of Southern California for the first time in his five-race career, Authentic led from start to finish in the $1 million race, earning 100 Kentucky Derby qualifying points, leaving him in second place behind Tiz the Law with a total of 200 points. For the first time, the Haskell had Kentucky Derby qualifying points of 100-40-20-10 up for the taking for the top four finishers because of the reshuffled Triple Crown race schedule in this year of the pandemic.

In addition, Authentic’s victory guarantees the son of Into Mischief a spot in the starting gate for the $7 million Breeders’ Cup Classic at Keeneland on Nov. 7 as part of the Breeders’ Cup “Win and You’re In” Challenge Series.

Although Authentic has secured his spots in the Kentucky Derby and the Breeders’ Cup Classic, which are both contested at 1¼ miles, the 3-5 favorite in the field of seven didn’t make it easy in the Haskell at a mile and an eighth.

It required all of Hall of Fame jockey Mike Smith’s guile and ability to hold off Ny Traffic and Paco Lopez.

“He’s a colt with an abundance of talent. Ability is something he does not lack. He’s got a lot of it,” said Smith. “But what he is lacking right now, he’s learning. He’s growing up. He sees things. Down the backside if you get a chance to look at the head on there are a lot of shadows back there from the sun at this point. He looked at every single one of them and he wouldn’t let me get him down close to the fence because he was looking at them too much.

“Then he kicked away like I wanted him to heading for home. Once that horse started to come at him, I wanted to get into him a little bit just to get him going. If he was going to start playing again I thought `I just better stay riding and hope he could hang on at that point’ – which he did.  I rode him well past the wire just to show him to keep running. I didn’t want to think it was over when he hit the wire.”

Authentic, the 3-5 favorite in the field of seven, and Ny Traffic raced 1-2 throughout the course of the nine furlongs.

Ny Traffic, looking for his first stakes win, had lost ground in upper stretch, got his second wind at the sixteenth pole and came powering through the lane while gobbling up ground fast under Lopez, who said afterward he was “100 percent sure” he had won the race.

Smith, who had piloted Authentic out to what seemed a comfortable 2½-length lead, went to his right-handed stick to get Authentic back to the job at hand.

Ny Traffic never let up and just missed, as Authentic just got his nose down on the wire in 1:50.45.

“I’m just so proud of him, but I was like everybody else telling Mike ‘You better stay after him. You’d better keep busy.’ He (Authentic) looks at everything, as we’ve seen in his past races,” said Baffert, who watched the race from his home in Southern California. “I could tell he wasn’t focused going down the stretch but he held on. He saw that horse coming to him and he took off again.

“Jimmy (assistant trainer Barnes) said he came back not really that tired. We had to ship. We’re learning about the horse. He might need a little blinker, though. He was playing in the stretch; I could tell he wasn’t laying it down. He was just playing out there and that horse came to him and kept him going. But when he got (out on an easy lead) by himself like that I thought for sure he was just going to go on. But he ran a great race.”

The end result was a tough loss for the connections of Ny Traffic, but trainer Saffie Joseph, Jr. found solace in the performance and the 40 Kentucky Derby qualifying points earned’

“I thought he ran good,” said Joseph. “Coming into this race he missed a work and I was a little concerned: Did we have enough? At the quarter pole you could see Authentic was cruising and my horse was off the bridle.

“To dig down and dig deep you can’t be any more proud of that. I was pretty sure we lost when I first saw it. We were a head in front right after the bob at the wire. I just want to keep going forward. That’s the important thing. Hopefully all goes well to the Kentucky Derby and we’re living the dream.”

The Kentucky-bred Authentic, who is owned by Spendthrift Farm, Starlight Racing, Madaket Stables, and Myracehorse.com, returned $3.20 for a $2 wager and became a millionaire with the winner’s share of the purse that boosted his bankroll to $1,011,200. His record is now 4-1-0 from five starts and his other wins include the Grade 3 Sham Stakes and the Grade 2 San Felipe Stakes.